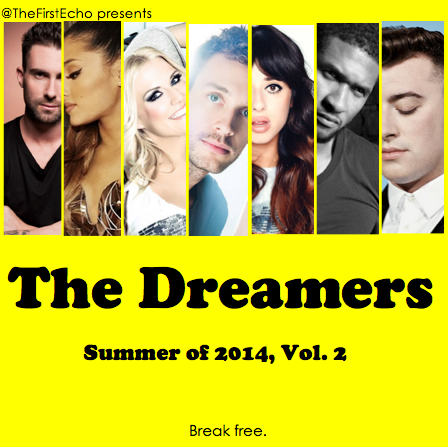 Before I head off to Comic-Con to conclude this madcap month I wanted to squeeze out another curated collection of tunes for the remainder of the summer. Much like the box office, the music scene this season hasn't been too bountiful.

But what's aplenty is Adam Levine; here he appears twice, first with Maroon 5 and then on a breezy track from the Begin Again soundtrack. (Check it out. Really.) What else? Your standard alt-dance-pop, Ariana Grande's latest, a breathtaking Whitney Houston cover, and -- get this -- a soulful hipster rendition of Blackstreet's "No Diggity" from 2013.

6. "No One Else Like You" by Adam Levine
7. "Enjoy the Ride" by Krewella
8. "Hideaway" by Kiesza
9. "Reverse" by Somekindawonderful:

18. "Bo$$" by Fifth Harmony - With lyrics like "Michelle Obama, purse all heavy with Oprah dollars," how could I not include this piece of irresistible trash?