Why 'Gone Girl' Owes Its Plot Twists to 'Knots Landing' 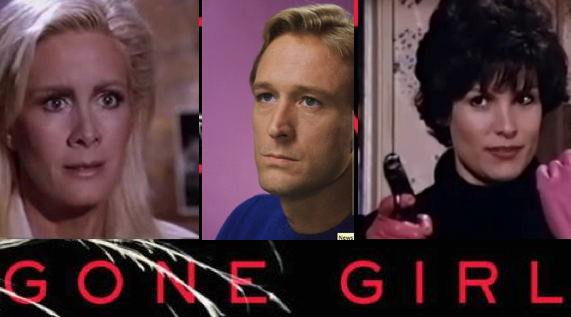 First things first: yes, there are SPOILERS ahead.

Second things second: yes, I'm pulling out a reference to a TV show that hasn't been on the air in 21 years.

Like many of you, I have become one of those rabid readers of Gone Girl. I can honestly say I haven't been this entertained by a book in a long time. True, it took me some time to get through it (my schedule isn't what it used to be), but I found it to be deliciously devious and wicked.

And because my pop culture brain works the way it does, I couldn't help but flashback to a similar plot development that unfolded on the 1979-93 CBS drama Knots Landing. For those of you who read the book (HERE COMES THE SPOILER), seemingly pleasant and sane Amy Dunne fakes her death to frame her husband, Nick, after she finds out that he's been a weasely little prick sneaking around with a younger woman he can't seem to quit.

The end of the ninth season and the beginning of the tenth season of the long-running primetime soap saw seemingly pleasant and sane Jill Bennett (Teri Austin) fake her disappearance to frame her boyfriend, Gary Ewing, after she realizes he can't break off his relationship with a woman he can't seem to quit (in this case, his ex-wife, Val).


After failing to get rid of Val altogether (as seen in the above video), Jill takes to her kidnapping idea by tying herself up and locking herself in the trunk of Gary's car. Unfortunately, this psycho bitch (a term frequently used in the book) didn't take into consideration that she could suffocate in there -- and that's what happens. She inadvertently frames Gary for her own death. The whole storyline kicked off a niftily crafted murder mystery infused with the show's signature suburban angst (things get started at the :23 mark below).
The similarities don't stop there either. On Knots, before Jill went off her rocker and nearly killed Val, she sleeps with a man in another city to give herself an alibi and her story more credibility. In Gone Girl, Amy sleeps with someone from her past in order to keep her story believable when she returns to her imperfect husband.
That said, I cannot wait to see David Fincher's adaptation this fall. I hear the ending has been changed, but I trust that author Gillian Flynn, who also penned the screenplay, will give us fans something satisfying.
But in the end, maybe all of this was just an excuse for me to wax nostalgic on Knots. God I loved that show.