I Survived a Grape Jelly Bomb on National Television 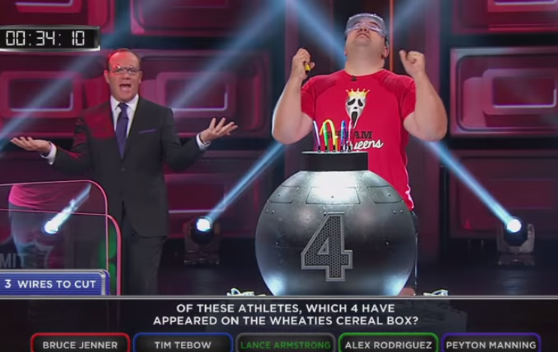 Yes, that's me praising the game show gods for helping me answer a sports trivia question correctly (almost) on the August 13 episode of BOOM! on Fox.

Accompanying me on this road to 15 Minutes of Fame (well, actually, we had 20 minutes of camera time) were my good friends Tim and Matt. And those uniforms we're wearing? We're proudly representing our kickball team, the Scream Queens -- not to be confused with Ryan Murphy's upcoming horror-comedy of the same name (coincidentally on the same network) starring Jamie Lee Curtis and Emma Roberts and premiering on September 22. (I swear this isn't a publicity ploy. The team was formed over a year ago!)


I mistakenly selected Tim Tebow after eliminating Bruce, Lance, and Peyton, and the consequences were...well...watch for yourself: