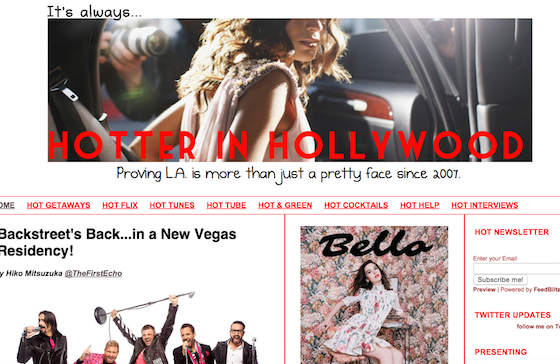 It is with bittersweet feelings that I announce the end of an era.

With a heavy heart, I have reached the difficult decision to close the digital doors on HotterInHollywood.com, the site I've been overseeing for the past nine years. It is something that has provided me lots of opportunities and tons of great experiences, and I couldn't be more grateful for what it has given me.

For those unfamiliar with my history with HIH, it all started with the annual Hot in Hollywood benefit on which I was a steering committee member for three years. During the non-profit's second year, its founder, the incomparable Michael Medico, wanted to start a blogsite to spotlight other charities, celebrate pop culture in a fun, positive way, and showcase what celebrity alumni were up to throughout the year. I was more than happy to offer some of my views on music, TV, and movies during those first couple of months.

Then, I was absolutely honored to take over the reigns shortly after its launch. And from there, HIH took on a life of its own, becoming its own little media outlet, opening doors (and red carpets) for me in ways I couldn't have imagined. One of those doors led me to the fabulous team at Bello Mag, where I became an editor and also wrote about all things entertainment.

However, with HIH ending, not all is lost...

Since I will continue to act as Bello's Entertainment Editor-at-Large, I will be writing about local happenings, movie reviews, red carpet events, and overall pop culture goodness over at bellomag.com (as well as pursuing other exciting writing endeavors). So think of this as redirecting my pop-culture-reporting efforts to one singular site now. (And FYI, The First Echo ain't going anywhere).

That all said, thank you to those who contributed to HIH over the years, those who supported the site, and those who indulged me with a read whenever I posted some commentary on a new music video or movie trailer.

In honor of this closing chapter, let's take a quick look back at some of the awesome people, places, and things HIH covered throughout its run: