Obsession of the Week: 'Search Party' & 'Party of One' 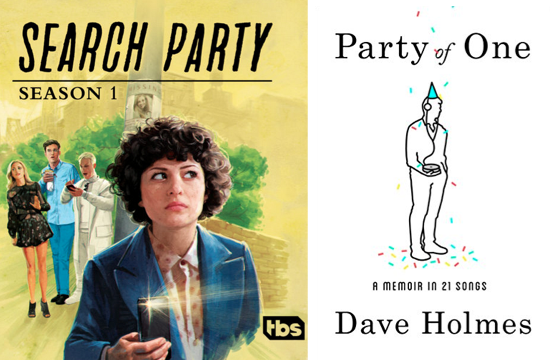 So, to kick off the new year, I binged the entire first season of Search Party, TBS's mystery-comedy starring Alia Shawkat and the scene-stealing John Early -- in 2 days. That's a total of ten suck-you-in-quickly episodes filled with insufferable characters you'll grow to like, weird side plots, and a refreshing quirk I can't find anywhere else on television.

I had the opportunity to attend the show's premiere party in New York, but considering it was just shy one month of my annual holiday visit, I now wish I had jumped on that wagon sooner. This show is meant to be binged. Each 22-minute episode flies by, and I can't get enough of the ominous-cool theme song and score. Not to mention the retro-awesome Nancy Drew-esque key art for the show.


And you can catch the first episode to start your own obsession...here:


Then, another "Party" I'm obsessed with is Dave Holmes's Party of One: A Memoir in 21 Songs. The former MTV VJ brilliantly breaks down his childhood, adolescence, and young adulthood across chapters named after popular songs that punctuated his formative years. I'm only halfway through and intend to savor every pop culture-referencing page.


books Obsession of the Week TV What I'm Reading