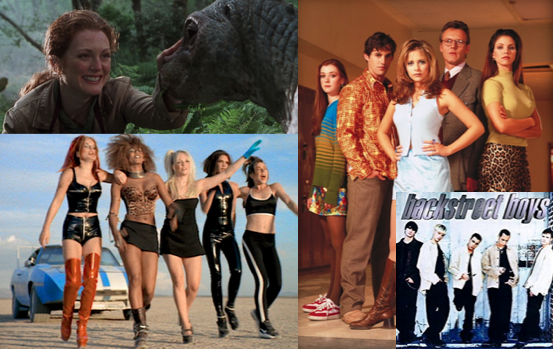 As unfathomable as it is to think that 1997 is now twenty (20!!) years ago, I can't help but travel back to a time when I didn't have to worry about rent checks, hereditary health issues, or contributing to a 401k.

The debut of Buffy the Vampire Slayer on The WB - Who knew the TV adaptation of a campy little film from 1992 starring Kristy Swanson (and Paul Reubens) would go on to become "one of the best television shows of all time"? (Rolling Stone, TV Guide, Entertainment Weekly, Time...) What had attracted me to the show was its teen horror premise. To me, it was as if someone had adapted R.L. Stine's Fear Street book series into a weekly drama that I could enjoy. Little did I know how rich of a narrative Joss Whedon's saga would turn out to be.


The music video for Spice Girls's "Say You'll Be There" - It was a perfectly cheeky attempt to let the ladies play scantily-clad Barberella extras in the California desert.


The Lost World: Jurassic Park - After seeing Jurassic Park on the big screen for the first time at an impressionable age in 1993, it became my Star Wars. So when the sequel came along four years later, it became the first highly anticipated film of my adolescence.


I came in 2nd Place in the state of New York... in the Forensics category of Oral Interpretation at the annual speech-and-debate tournament in the capital city of Albany. My poetry and prose readings of Shel Silverstein and Stephen King killed. And my teammates at Iona Prep ruled back in the day.

Backstreet Boys arrived in the U.S. with their self-titled debut album - If you're like me, you remember where you were when you first heard "Quit Playing Games With My Heart." I'm pretty sure I was driving my dad's white Toyota Camry somewhere in Westchester County, New York when it came on the radio, and I asked myself, "Who are these Boyz II Men wannabes?"

Why 1997 Sucked: Producers killed off my favorite TV character at the time, Sydney Andrews, on Melrose Place. At the end of the fifth season, she was mercilessly plowed down by a car -- in her wedding dress -- outside the church where she just tied the knot to Baywatch alum David Charvet. R.I.P.