Why I Haven't Deleted Uber Yet 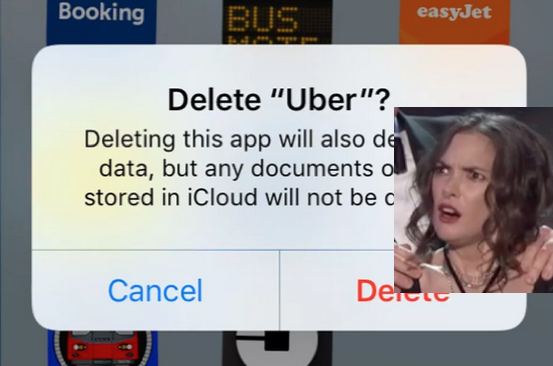 If I have learned one thing as I get older, it is this fundamental lesson: don't be quick to judge or make a snap decision.

Hence why this past weekend I hesitated to cancel my account with an app I don't use that often to begin with. (I'm a lightweight when it comes to drinking, and I'm in love with my new car, so the need to rely on the kindness of strangers behind the wheel isn't as great.) While #DeleteUber was on fire across all of my social feeds, I read up on people's reasons for getting rid of the service and switching over to Lyft as their mode of transportation. At first, I understood the rage behind their rapidly spreading boycott.

The movement started after the New York Taxi Workers Alliance called for a temporary halt to rides heading to John F. Kennedy airport as a gesture of solidarity with visitors who were detained there after Trump's sudden order to restrict entry from seven predominantly Muslim countries. (Note how I refrain from using the word "President" in front of his name.) Uber continued to send drivers to JFK and announced it would NOT charge surge pricing.

Some people thought that was a crappy thing to do and saw it as blatantly capitalizing on a crappy situation.

Then it came out that Uber CEO Travis Palanick is on Trump's Economic Advisory Board. What an asshole! I thought. This added fuel to the boycott fire...even though Palanick had issued a statement opposing the travel ban. But people immediately decided to go Team Lyft instead.

...Competitor Lyft donated $1 million to the ACLU, which is fighting Trump's travel ban in court. For a lot of people, that was a clear reason to delete Uber and install Lyft instead.

Now Lyft usage is surging, and it's passed Uber in daily downloads, according to TechCrunch. But the #DeleteUber crew seems to have missed Lyft's own ties to the Trump administration.

In 2015, financier Carl Icahn made a $100 million investment into Lyft. His interests are represented on its board of directors through John Christodoro of Icahn Capital. And Icahn did a lot more than Kalanick to help get Trump elected. He was an early and vocal supporter of Trump during the campaign, claiming that the businessman would be much better for the economy than Hillary Clinton, and Trump appointed Icahn as a special adviser on regulation in December.

Icahn isn't the only Trump adviser with a connection to Lyft. Founders Fund, the venture capital firm founded by Trump adviser Peter Thiel, led Lyft's B round and invested in the next two rounds as well.

Kalanick has made no secret of his libertarian political views, which are more closely aligned with Republicans. But if activists are upset about his support of Trump, boycotting Uber for Lyft isn't necessarily the solution.

So, the moral of the story? Everyone's got dirt on their hands. And what we have here is a tale of two companies vying for the spotlight in a game of optics, appealing to their customer bases in any way possible.

Who needs a taxi?