Pop Culture Rant of the Week: The Conundrum of '13 Reasons Why' and 'Big Little Lies' 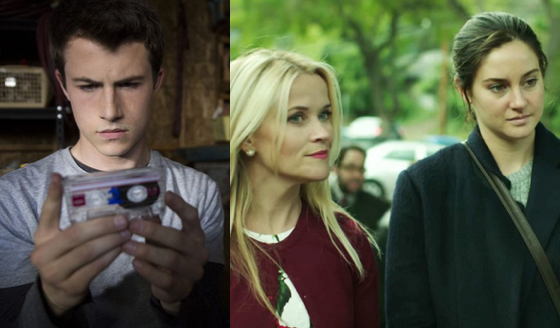 Big Little Lies (HBO) and 13 Reasons Why (Netflix) are two of the biggest and most talked-about shows of the spring. Both are adaptations of bestselling novels. Both have sizable fanbases.

And both are being considered for second seasons.

This is a mistake IMHO.

If I remember correctly, BLL was sold to us as a "limited series." As in, "miniseries." As in, "just one singular season." On the other hand, 13 Reasons Why was not sold to us that way -- probably for good...um, reason. (Netflix loves keeping those doors open.)

Audiences of both shows want more. They're insatiable. If you are among them, ask yourself: Why am I pining for a second season? Why can't I be satisfied with each show's perfectly executed conclusions? Did I forget they're based on novels that aren't part of a trilogy or series (like the sprawling Game of Thrones)? Do I want another season of each just so that I can later bitch and complain about how it's not as good as the first? (Because half of the time, that's what happens with the sophomore run of a hugely popular show that captures the zeitgeist -- See: Empire, Desperate Housewives, and certain Ryan Murphy productions).

But then again, I remember this is America. When something takes off, when something is an instant success, the eyeballs of those behind said success turn into cartoon dollar signs. We don't do things like the British do with their television hits; they're all about single-season programs (The Office, London Spy, Fawlty Towers). We push further. We take creative risks. We expand universes. We come up with superfluous backstories. We strive for at least 100 episodes to secure a sweet syndication package. We eventually run things into the ground.

Had Gone With The Wind been adapted in the 2010s and raked in a shit-ton of money at the box office (or in ratings), I can imagine there would be a producer somewhere scurrying to turn it into a five-film franchise. Gone With The Wind: After The War, presented in IMAX. In fact, someone did try it... back in the 80s. (Check it.)

Franchise. That's one F word I've grown the hate the longer I live and work in an industry town that milks things for all their worth...before rebooting them a measly decade later. After all, "franchise" is the spawn of capitalism, and that is the social system on which this country is arguably built.

So, go ahead. Stay tuned for 13 More Reasons Why and Bigger Little Lies. Just don't complain to me if and/or when they fall short of your expectations.