The Frustrating Brilliance of the 'Girls' Finale 
"Those who have ignorantly labeled or dismissed Lena Dunham's polarizing comedy about entitled twentysomething white chicks living in Brooklyn as a Millennial Sex and the City should be pitied for their lack of open-mindedness, their trite arguments, and the huge sticks they have up their asses. Because they apparently haven't scraped away the surface to see that underneath the whiny, woe-is-me sensibilities is an acutely observed portrait of post-collegiate life, packed with embarrassing mistakes and complaints we've all been guilty of making (but never wanted to admit or remember). Many comedies and dramas have attempted to paint the Twentysomething Experience, usually with no real resonance, accuracy, or success. What this show has that others didn't is a creator at its helm who's actually living it in real time (note: writer-director-star Dunham is 24) as well as a female lead who actually looks like she's torn through an occasional pint of Ben & Jerry's (and yes, that matters)..."

Throughout the past six seasons, my view on the show didn't waver despite the fact that many have equally praised or bitched about the four titular heroines who populated the coming-of-age dramedy. (I admit: those two middle seasons weren't my favorites.) I accepted that the show, like its protagonists, was Messy and Awkward. Those were two of its "brand pillars," as marketers would say. Girls did its job in making me look back at my 20s, regardless of my gender, and acknowledge it as a time when I stubbornly held onto my own assumptions, made mistakes, and thought I knew what I wanted when I actually didn't know jack.

But as the show soldiered on, and as the characters headed deeper into those 20s, realizations were made and lessons weren't just learned -- they were ignored and learned again in subtle, beautiful moments when least expected. In other words, they matured. Two must-watch standouts that reflect this were Season 5's devastating "The Panic in Central Park" and Season 6's Emmy-worthy "American Bitch."

The final episode of Girls was another reminder that life is never neatly wrapped up in a big bow. And that's what made it satisfying in its own funky way. Lena Dunham's Hannah trades in the big city for some upstate greenery to accept a cushy job and raise her fatherless child in a picturesque house, and Marnie (Allison Williams) accepts the role of Hannah's non-lesbian domestic partner as a way to distract her from her own directionless life. (FYI, the previous episode had already bid adieu to Shoshanna and Jessa in an appropriate non-finale.) But not all is well. Suburban ennui sets in, and Hannah realizes motherhood is not what she expected. In one fun scene, after having a breakdown with her mom, she storms off and has a run-in with a teenaged girl who can't deal with her own parental situation at home. It's one generation attempting to console the next -- and if you thought Millennials were a handful, this glimpse into GenZ problems can't warrant enough eye rolls. 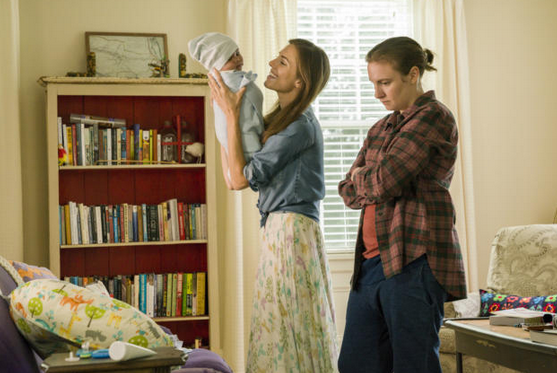 For more of my thoughts, check out my piece over at The Huffington Post.