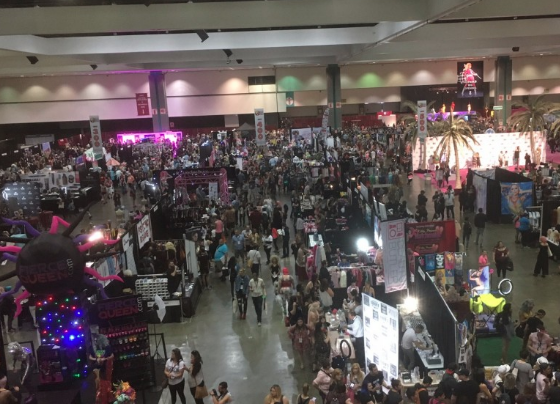 Last weekend, for the third year in a row, the Los Angeles Convention Center was taken over by glitter, big heels, and even bigger hair as RuPaul’s DragCon treated attendees of all colors of the rainbow to a wide range of festivities, panels, and parties. By the time the inclusive 2-day event came to an end (with an uplifting keynote speech from Ru himself), we walked away with a few new friends and a little more hope for a world that doesn’t feel so inclusive for many. Here’s what we found out…
1. DragCon a family affair — For the first time, DragCon featured a “kids zone” on the convention floor, welcoming families of all kinds and demonstrating how the event is a safe space for anyone and everyone. After all, the Con is all about celebrating your authentic self while being surrounded by your “chosen family.” 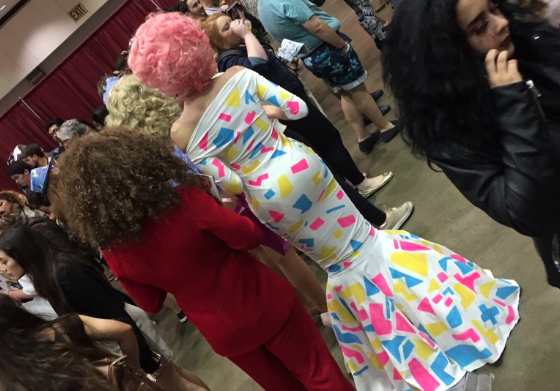 2. The Drag Race Mad Libs Live! panel featured one of the most heartwarming moments of the weekend — Our first day kicked off with a fun hour playing two rounds of the fill-in-the-blank word game with RuPaul’s Drag Race stars Mimi Imfurst and Peppermint. Sitting in the front row was a father with his eager 9-year-old son, an obvious fan of Drag Race, who asked Peppermint why she chose to compete on the show. “Because why not, honey?” she replied and then asked, “Would you like to be on Drag Race?”  The boy responded, “Um I don’t know, but I do have a tutu at home!” The crowd cheered. 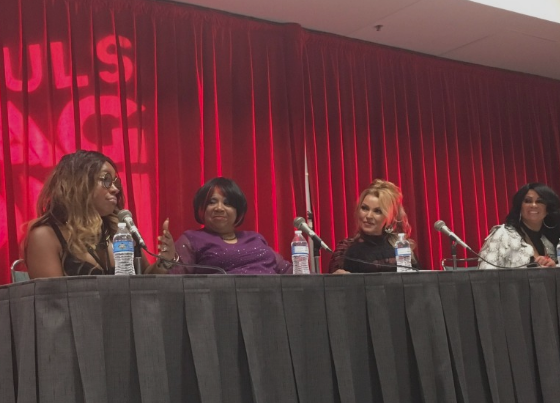 3. CeCe Peniston “Finally” speaks out on the current state of dance music — Over at the “Dance Divas of the 90s” panel on the second floor of the West Hall, Peniston, best known for her 1991 hit “Finally,” talked about the changing landscape of dance music, particularly in the age of Shazam, streaming, DJ-artist collaborations: 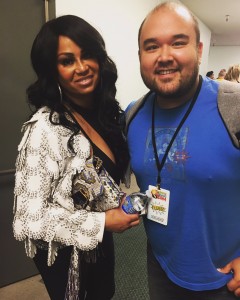 “When we were out [in the 90s], it was exclusive. There were a couple of artists. You knew who those artists were. You looked forward to their videos…but there are two words that differentiate how things seem to go down [in dance music now]. And those two words are ‘featuring‘ and ‘and.’ So whenever you’re doing a record, or you’re out doing a record with somebody, this really makes a difference because when you’re [after] ‘so-and-so featuring,’ your name gets lost and you can forget your name being known. And that’s just what it is, because they’re gonna go with whatever the first name is. But if you have ‘CeCe Peniston and,’ it gives you that notoriety of what you need to have. Our job as artists is to take you away from your day…and bring you back to the 90s and smile…Our thing is to give you memories and to give you love. Just remember these two words. ‘And’ and ‘featuring’ make a big difference in how your music is distributed because that means a difference between knowing who you are as an artist, what your contribution is, and you just getting lost in the background as the extra vocalist.” 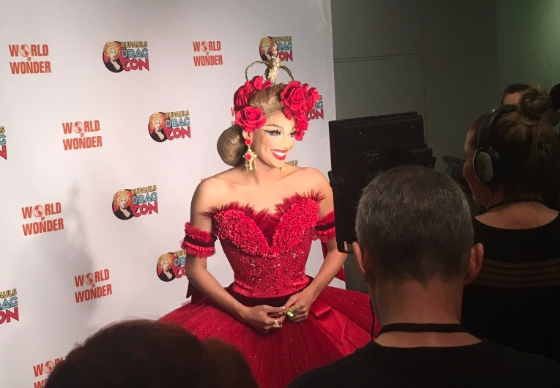 4. Ultra Nate thinks dance music has gone “off the rails” — At the same panel, singer Ultra Nate (“Free,”), who also revealed that she once went to school to study medicine, elaborated on how headliner DJs of the EDM world seem to be monopolizing the dance music scene: “The vocalist is no longer the artist, just some imaginary person that is just a voice on the track. There is no story. There’s no name. There’s no credit…so when you’re getting so much of that from one particular genre, you dial it down, you devalue it. There are no longer personalities for people to buy into…they have no relationship. All of us [up here on this panel] have been the background of a lot of people’s lives. There are certain songs we’ve put out through the years that are part of people’s stories out there. And there are certain memories attached to it. That’s the difference between being an artist and just being a nameless, faceless voice on a record singing the same line over and over again. There’s no story there. When that got lost, that is when dance music as a genre started to really go off the rails…the artist has become a second-class citizen.”

5. Pepper MaShay once turned back time — Meanwhile, fans of the woman behind LGBT anthems like “Dive in the Pool” and “I Got My Pride,” were delighted to hear that she once did backup vocals for Cher on her 1989 hit “If I Could Turn Back Time.” 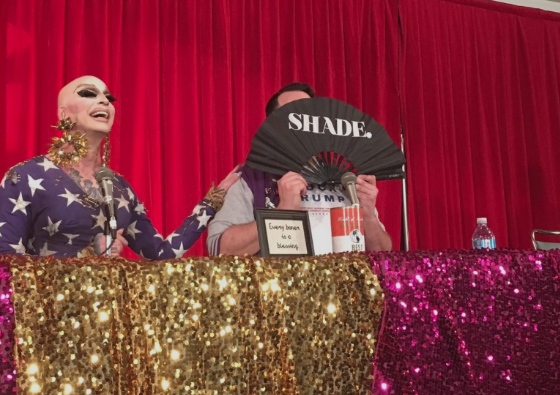 6. It’s impossible to count how many times the word “shade” was mentioned throughout the weekend — Spilling T and throwing shade is practically the bread of butter of drag culture, but during our time at DragCon, we couldn’t keep track of the number of times every queen, panelist, and fan dropped the word. During a live taping of Jonny McGovern’s online talk show, Hey Qween, Jonny whipped out a fan that was especially made for the occasion (above) while chatting it up with The Princess. Meanwhile, co-host Lady Red Couture was off on the side enjoying some chicken wings.
7. Know when to pay your respects — When a drag queen performs Janet Jackson’s “Rhythm Nation” and then segues into the choreography of “If,” you stop what you’re doing and give her some respect. This obviously happened while we walked the convention floor and browsed through the dozens and dozens of exhibitors and vendor booths. 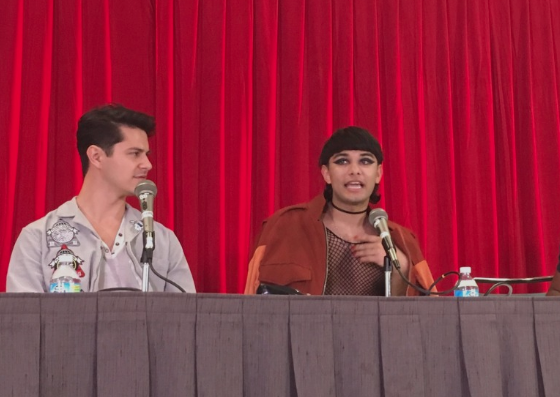 8. The kids are all right — A panel featuring young LGBTQ actors from television included Michael Willett (Faking It), Noah Galvin (The Real O’Neals), Mark Indelicato (Ugly Betty), and Elliot Fletcher (Shameless). Moderated by actor Darryl Stephens, discussion topics ranged from personal inspirations to memories of their first auditions. But most notable was the panel’s views on the next wave of gay characters in both film and TV. Said Willett, “I think that the future is where…it’s not about whether [characters] are gay or straight, it’s about: ‘Are they interesting? Are they captivating? Are they believable? Do we want to follow these people?’ I’m hoping that the new generation of gay storylines are moving beyond the coming out story and is about something deeper. Who are we after we come out? What do we encounter after we know who we are?” Added Galvin: “We very often focus on the struggles before the coming out process, the internal struggles of a queer person coming out, but what happens after they come out?” 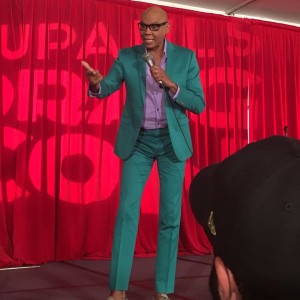 9. RuPaul gives new meaning to “guRU” — During his closing keynote speech, Ru addressed a room of hundreds, offering words of wisdom on how to avoid becoming your own saboteur and reassuring those who have felt abused and ignored by higher powers. “This is a revolution,” he said. “As we deal with what’s happening in government, it’s important to remember that our secret weapon is something that they don’t have … [which is] our love, our music, our dancing, our joy, our love of colors and beauty. That’s the thing that will get us through this mashugana.” His inspiring words continued with a rousing conclusion that brought tears to eyes and the audience to its feet: “This election, when you look under the hood of it and see what it’s really about…it’s the change over from the 20th century to the 21st century, and the people who don’t want to move into the future forward…They took on this used-car salesman who promised them that they could turn back the hands of time and bring it back to what it was. We ain’t going back, baby!”
10. DragCon Goes Bi — Bicoastal, that is. Before delivering his keynote speech, RuPaul made the announcement that DragCon will also be taking place in New York City September 30 through October 1.
Hiko's Hollywood Los Angeles reviews