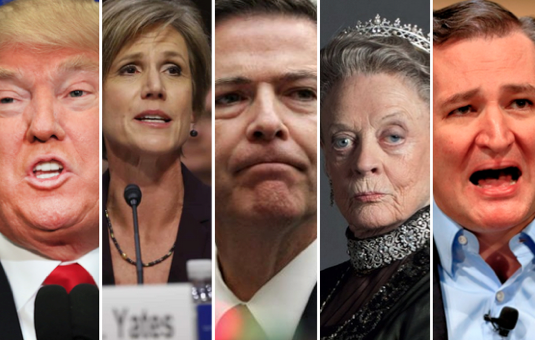 Most recently, the guy who's investigating the POTUS's ties to Russia (that'd be FBI Director James Comey)...was just fired by the POTUS himself. I was like...


And did anyone feel for Anderson Cooper while he had to sit there and listen to KellyAnne Conway ramble on yesterday? His eye roll spoke volumes:

Then there's Ivanka Trump, former model and current model of white privilege, who had the gall to write a book about working women...while quoting African-American figures commenting on slavery. I'm like...

But let's focus on the tea that's about to be spilled all over D.C.

Recent developments in this Russia-fueled scandal seem to demonstrate that the evidence against the POTUS is piling up nicely. Is anyone else in our government seeing this? Screw optics. Say what it is! Let the truth out!

Last but not least, there's Sally Yates, a Wonder Woman in her own right, a figure I see inevitably being played by Sarah Paulson in a future Ryan Murphy production. When she shut down that shit during those hearings, I was like: