I Am No Longer Proud To Be An American 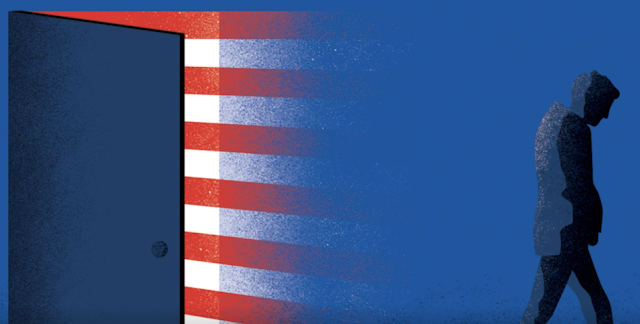 Regardless of the official election results and what happens over the next several days, I can legitimately say that I am no longer proud to be an American.
And no, these aren’t the overdramatic words of a “liberal snowflake.” These are the words of a rational, fact-driven, empathetic U.S. citizen who has seen millions and millions vote (again) for a destructive, corrupt "leader." It is more than disappointing. It is soul-crushing. It represents the further erosion of the word that supposedly describes these States - "united." It is the extinction of morals. Many pundits and think pieces will attempt to explain and dissect the results of this election, but for me, it won’t matter anymore. I’ve done the reading. I’ve listened to dissenting sides. Yet I still cannot be proud to live in a country where the actions of countless people continue to support racism, misogyny, xenophobia, homophobia, treason, and blatant disrespect for the Constitution. I can no longer be proud of a country where a sizable portion of its population turns a blind eye and a deaf ear on the irrefutable criminal acts and dangerous rhetoric of an administration that has no regard for common sense, scientific fact, basic decency, and human life itself.
Willful ignorance is the cancer of America.
These words also come from an American who recognizes the enormous socioeconomic disparities that have created glaring systemic problems in this country, all of which have enabled destructive forces and figures to chip away at our democracy. And one of those systemic problems lies within education. Basically, what it all comes down to is this: the more you degrade education (as this country has done for decades), the less informed people become and the more they're susceptible to lies and deception. The more they're susceptible, the less they can think for themselves, the narrower their worldview, and the wider the socioeconomic gap grows. The powerful become more powerful, the middle remain stagnant, and the powerless grow weaker. Wash, rinse, repeat. This has been the American way since before I was born, and it has metastasized to disturbing proportions in the 21st century.
For those reading and nodding their heads to this, this won't come as a surprise, but stop and take into consideration the millions of those for whom this doesn't register, those who can't make the correlation, those who are too self-serving to bother looking at the bigger picture, and those who don’t have the proper resources and tools to be properly informed.
I could never fathom the idea of personally knowing more than one person who supports this despicable excuse for a political leader. And I refuse to see this as an indication of the “bubble” I live in. The bubble is a concept created by someone to tell people like me that I live in a privileged reality when the true reality is this: that “someone” (and others like them) most likely live in a different world, one that promotes fear of The Other, breeds intolerance, doesn’t foster progress, and doesn’t believe in equality for all. A world in which no one has learned from the past and where everyone will continue to relive the horrors of history. (Why is that? Again, see above comments on education.)
That all said, to the few friends of mine who have done the serious research to make arrangements to move out the country, I don’t see this as an exaggerated reaction anymore. Your hope for this nation, like mine, has significantly diminished. And to the few friends of mine who are considering quitting Facebook because of the role it and other platforms have played in the intensified division of America, I support you and want you to know that I am finally considering the same.
The American experiment as we know it has failed.
"Fall asleep in a democracy, and you will wake up in a dictatorship." - Otto Gritschneder