I Am The World 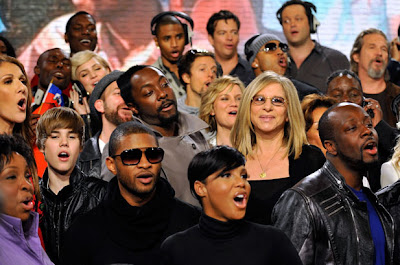 So, my obsession with the "We Are the World" remake is finally waning. While I spent a good 24 hours attempting to distinguish who's who on the track after purchasing it on iTunes (my first charitable donation of the year) - and before I watched the star-studded video - a few thoughts popped into my head:

1. Justin Bieber shouldn't have opened the song. I'm sure Lionel Ritchie & Co thought it was good idea to immediately hook in the 15-year-old girls with this tease, but it just wasn't the proper note on which to start such an epic number. It's like asking Abigail Breslin to read the opening to War and Peace.

2. Upon her return to the recording studio after several years, I could sense Barbra Streisand's frustration over her unmet expectations: "You expect me to sing less than 20 words? I could belch out the lyrics to 'Hello Dolly,' and it would be better produced."

4. The filter placed on Janet Jackson's vocal made her come off as some Xanax-dazed ghost. It was like the audio equivalent of Cybil Shepherd's soft lighting in any given scene on Moonlighting.

5. Pink could have sung the entire thing for all I care. The woman has never sounded better.

6. Note to Jamie Foxx: Congrats on the Oscar and all, but Ray was nearly 5 years ago. Did you not get the memo?

9. Notably absent vocals (or perhaps my ears have failed me): Faith Evans, Harry Connick Jr., Jason Mraz, et al. And Tina Turner, where you at?

10. It seems to me that Celine Dion was singing an entirely different song. Either that, or she totally dominated and made that song her bitch.

11. One country star showcased out of the whole bunch? Really? Carrie Underwood's handlers must be piiiiiiissed.

12. Miley Cyrus actually didn't suck. And on that note, notice how none of the Jonas Brothers were featured.

Believe or not, I actually dug the new song. RedOne did an admirable job composing the new rendition, and it provided a heavy dose of childhood flashbacks for me. I remember my mom constantly playing the original "We Are the World" on a vinyl record (kids, Wikipedia that term) when I was in kindergarten. Back then the music had put a spell on me. Listening to all of those voices, a choir of celebs, seemed like magic, as if the world really was singing. Every time it played I imagined the world - the actual planet Earth - shining brighter, becoming a happier place, improving. I would take in the melodies, bob my head to the subtle rhythm and then proceed to focus on racing my Hot Wheels across the kitchen floor. Now, in 2010, it's a small miracle if those feelings last until the next traffic light while I'm racing my Ford down Westwood Boulevard.

If you're still jonesing to make a donation, go to world25.org.

And in case you missed it: