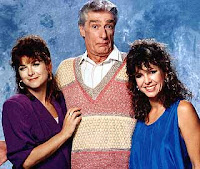 I remember when Natalie and Tootie had a double wedding. I remember when Blanche was accused of stabbing a lover to death during a murder-mystery weekend. I remember Harry Weston's unconditional love for Dreyfus. I remember Sandra always trying to pull Mary into some neighborhood scheme.

I remember Saturday nights in a way no one born after 1990 can remember. From the mid-80s to the early 90s, I, along with millions of others, actually stayed home on Saturday nights and fell in love with the aforementioned characters. The Facts of Life. The Golden Girls. Amen. 227. Empty Nest. The short-lived Nurses (anyone?). Even Mad About You got its start on this comedy block.

Then, naturally, came the revolving door of 10pm dramas. First there was Hunter, then Sisters, then The Pretender (a Mom favorite). And of course, Profiler (poor Jamie Luner jumped off Melrose to land on another sinking ship). I never stayed up to watch a full episode of either of these shows. My normal routine would consist of catching the theme song to Hunter or the opening steambath conversations on Sisters and then heading off to bed (Saturday Night Live didn't land on my schedule until I was 12 or 13).

Later on, I'd stay up when Winnetka Road premiered, an easily forgotten Aaron Spelling sudser about the dramas in a Midwestern burb...co-starring Ed Begley Jr.. Needless to say, snooze.

Why did so many of us stay home on the busiest night of the weekend? I don't think it was an age thing, although my social calendar was rarely full between the ages of 8 and 14. Did people actually go out without the comforting reassurances of a DVR? Sure, there were VCRs, but ratings back then amounted to actual, watch-it-now audiences. If so many people stayed home to hear Rose Nylund tell another St. Olaf story, who was out at the bars, the nightclubs, the restaurants, the multiplexes?

What happened since then? Lots of things actually, probably enough to fill an entire thesis paper on The Evolution of Television Programming - more than I could fit here in this little post. The Saturday night television landscape, as we all know, is a ghost town now. It's where networks regurgitate last week's episodes, air broadcast premieres of movies no one cares about, and send struggling reality shows to die. Is there nothing that can be developed to appeal to a Saturday night crowd that stays home during primetime hours? Are we a couch potato nation so distracted by cable and the Internet (and everything else) that launching an original scripted series on Saturday night would be considered a ginormous risk, a near death sentence? The odds are heavily against any new show that dares to be slotted here.

I feel sorry for the Saturday night timeslots. They're endangered, neglected, and they need our support. I truly believe we've all become conditioned to think certain nights of TV require certain kinds of programming. And that's what it is really. Programming. Shows aren't programmed; we are. It's as if we've become programmed to believe that Thursday nights are meant for "quality" dramas. Wednesdays are meant for comedies. Tuesdays belong to a mediocre mix. Mondays are for reality, forcing us to look at our own lives and be thankful they're not as pathetic as every narcissist who competes for a rose, gets into a bar brawl or has sex in a hot tub. And Sundays are for comfort-food viewing, shows that help us ease back into the much dreaded work week. As for Fridays? That's another night gradually going the Saturday night route...Where the sitcoms at? And c'mon, do you know anyone who still watches The Ghost Whisperer or Numb3rs? And yes, I just numerically wrote out the name of that show.

But maybe we're not programmed at all. With viewers gaining more control over how and when they watch their favorite shows, networks execs might as well slot their programs with a blindfold for all we care. If it's good, we're going to watch. On our iPods. On Hulu. On DVD...We're ultimately the ones in control. Right?

Anonymous said…
Programming people vs programming TV = brilliant. Another very insightful, beautifully written piece - and yes, we all stayed home and watched TV on Friday & Saturdays - some of us still do!
3:59 PM

Jenny said…
Ah what a flashback!