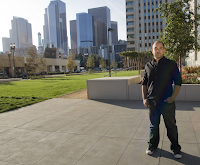 I lived through the Trucker Cap Takeover of 2003. I survived the reign of The Governator. I participated in the historic marches for NOH8. I witnessed The Great Pinkberry Explosion of 2008...followed by The Great Pinkberry Implosion two years later.

And later this summer I shall experience the aftershocks caused by The Giant Closure of the 405 Freeway, or Carmageddon, as locals are calling it.

By now, there's nothing besides that long-awaited Big One that will shake me like a proverbial Polaroid picture and force me to leave my Southern California haven I call Los Angeles.

When I moved here nine years ago (today) I could not have imagined the things, the people, the events that would shape me, inspire me, and help me get to where I am now (Heads up: there's going to be a lot of talk about journeys, reflections, and continued aspirations while I celebrate this personal anniversary of mine).

Nine years ago I didn't know what a blog was. I never heard of a smartphone, but I did think highly of my little Nokia cellular. I didn't have an iPod that enabled by music download addiction. Nine years ago I wouldn't have placed my money on a cranky Brit named Simon Cowell. I would have scoffed at the idea of having cameras follow a group of guidos (or housewives) in New Jersey (actually, I still do). I would have thought that Gaga was the name of a line of baby toys and not the surname of a viciously talented Lady with whom I would literally brush shoulders on the set of one of her iconic music videos. Nine years ago I didn't think I'd work on stages where television history was once made, sit down with celebrities to talk about their "inspirations", and randomly play Charades with the creator of Desperate Housewives one fateful night in Burbank.

Nine years ago I would have never imagined that I would be nurturing my narcissistic tendencies through something as simple as a status update.

What I did have nine years ago was this: big eyes, big dreams, and big debt. The eyes are still big, although they get that way whenever I get a glimpse of the lunch spread at the Four Seasons Hotel during a press junket. My dreams are still big, although I have learned to reassess my priorities and discipline myself more (that television pilot ain't gonna write itself). And that debt? Still there, still big, still annoying as shit.

I'm not sure if I could dignify the question, "What would you tell your 22-year-old self now?" with an answer. He had to learn and enjoy everything as it came. Otherwise, he wouldn't be the jaded, thankful, enlightened, honored, educated, humbled, and loved individual who speaks to you now (although, I might warn him about rear-ending that Ford Explorer back in April of '03 and tell him to avoid buying that ugly blue shirt he'll never wear from that douchey store on Melrose).

I could go on, reflect some more, analyze the crap out of my life, and fall into the trap of nostalgia, but I have a life already in progress that I don't want to miss.

It's time focus on the now and the next nine years...trends, fads and Mother Nature permitting.

Happy Anniversary to me,