"Nostalgia is denial of the painful present." - Paul, Midnight in Paris 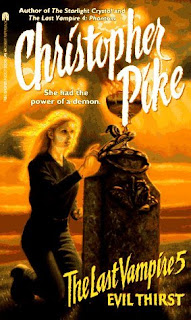 Having developed a tendency to frequently shuffle the 90s playlist on my iPod and honor the anniversaries of certain movie releases, it's been brought to my attention that I have become the King of Looking Back. And if it's because I refuse to accept and face the "painful present," then...oh, who am I kidding? That's the reason. My bank account shames me whenever I glance at the balance on my ATM receipts, a diet of Diddy Riese cookies and Kraft Macaroni and Cheese has done nothing for my health, and the pressure to do that whole "figure out my place in the world" thing is a struggle I face almost every day. But I continue to revisit the past. This month I have decided to dig up old copies from Christopher Pike's The Last Vampire series and reread the fifth and sixth installments, Evil Thirst and Creatures of Forever, for a couple of reasons. First, the bestselling young-adult author has recently released a seventh Vampire novel after his publisher capitalized on the whole bloodsucker craze and repackaged the first six books as two mega volumes titled Thirst (an eighth book, or fourth "volume," is expected to hit shelves in the fall). Needless to say, this piqued my interest, and I wanted to refresh my memory before I dived into these new stories about our immortal heroine, Alisa, and her epic dramas involving Egyptian gods, nuclear espionage, reincarnation, and becoming a mother to a creature as deadly as her worst enemy. 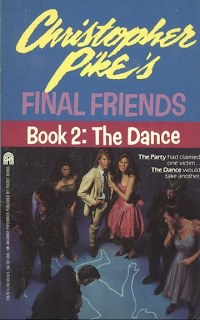 The other reason was to see if these books held up fifteen years after I first read them as a 16-year-old working at an amusement park on the shores of Long Island Sound in New York. And they do. The engaging first-person narrative of these particular novels far surpasses the writing in most of the YA thrillers that were popular at the time. And from what I remember, the more mature content and three-dimensional characters in Pike's other books made his stories all the more compelling to read. There were no contrived tales of terrorized babysitters, teenage fatal attractions, or other cliched adolescent fodder. Sure, his characters were in high school, but he went beneath the trendy surfaces and touched upon themes - both cosmic and existential - rarely seen in demographically similar novels. My rekindled relationship with Christopher Pike actually came about last year when I was inspired to track down the ever elusive author (his real name is Kevin McFadden, and he's known to be somewhat of a recluse). I even spent a good part of last summer putting together a pitch for a documentary about a struggling writer's quest to meet one of his literary idols (guess who was the protagonist?), and I turned to a few friends and acquaintances for help: It's clearly a work in progress, just like the rest of my life. Speaking of which, my 9-year anniversary of living in L.A. is quickly approaching, and I have much to reflect upon...but more on that later. Searching and searching, H.P.M.
Email Post
Labels: Christopher Pike the personal crap What I'm Reading