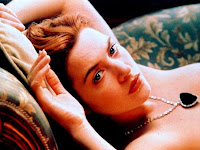 So, it appears James Cameron is resurrecting his cash cow from 1997 for a 2012 audience. You know, the one about the big boat that sinks (if you consider that a spoiler, then welcome back from Jupiter).

I guess it's the lesser of two evils. I mean, at least it's not a remake...or a sequel. Oh, wait, that already happened.

*Yes, it's true that I saw this film three times in the theater when I was senior in high school. Yes, it's true that I proudly own Celine Dion's Let's Talk About Love on which the ubiquitous "My Heart Will Go On" can be found. And yes, it's true that my prep school friends and I would lip sync to the ballad like crazy in my dad's 1992 Camry while driving through the streets of New Rochelle.

Your judgments have been noted and quickly dismissed.