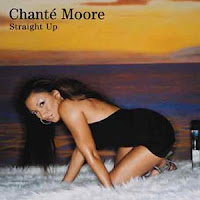 The year was 2000. And lost in the shuffle was this bumpin' R&B number from a woman who would forever struggle in the shadows of giants like Mariah, Aaliyah, and Lauryn. I'm talking about Chante Moore, the former Mrs. Kadeem Hardison (that's right, A Different World's Dwayne Wayne!), and her single-that-shoulda-soared "Straight Up."

I randomly happened to remember that I had put this jam on one of my European-influenced mix CDs after living in London during the first half of 2001 (such carefree, pre-9/11 times). I had caught this video while watching MTV UK in my flat and was hooked ever since, sadly never seeing it catch on here in the States.

And looking back now, it just screams early 21st century (Tae-Bo choreography! Sports jersey midriffs!). How quaint compared to the glittery dance trash that's currently being forced down the ears of the American public.