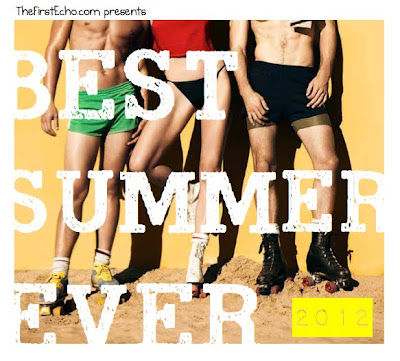 Now that you've seen The Avengers twice and contributed to its $500 million at the box office, why not break out the sunscreen, grab a beach towel (along with a copy of Fifty Shades of Grey) and plug in to some tunage that'll have you bopping along and smelling the barbecue.

Just remember to wait 30 minutes after eating before jumping into the pool...

1. "Scream" by Usher
2. "Laserlight" by Jessie J feat. David Guetta
3. "Ruby" by Foster The People -- This unreleased B-side sounds like it's been simmering in 1979 and waiting to be dusted off for all of those kids with pumped-up kicks to enjoy.
4. "Disconnected" by Keane -- The piano rockers have returned to fine form with an easy-breezy harmony, and this time they've brought a Dario Argento-inspired video for their second single off Strangeland:

5. "Some Nights" by fun.
6. "Pop That Lock" by Adam Lambert
7. "Don't Wake Me Up" by Chris Brown -- Normally, Breezy makes me want to fling dog poo at his face, but I can't resist the acoustic opening of this club-banger and the climactic chorus that seals it as one of summer's great dance anthems. Or try the William Orbit mix here.
8. "Promises" by Nero -- The Skrillex-free original, that is. See Exhibit A below:

9. "Blood for Poppies" by Garbage -- And it feels like 1996 all over again.
10. "Guardian" by Alanis Morissette -- See above.
11. "Like A Star" by Britt Nicole
12. "What Makes You Beautiful" by One Direction -- Because every summer requires a guilty pleasure.
13. "Back in Time" by Pitbull -- Because every summer requires a theme song from a Will Smith blockbuster (MiB3).
14. "Timebomb" by Kylie Minogue -- Or, what I like to call Kylie Schooling Madonna On How MDNA Should've Looked and Sounded:

15. "No Church in the Wild" by Jay-Z & Kanye West feat. Frank Ocean -- It had me at the trailer for Baz Lurhmann's The Great Gatsby.
16. "Celebrate" by Jordin Sparks & Whitney Houston
17. "Call My Name" by Cheryl Cole
18. "Dance (The Way It Moves)" by The DNC feat. Gigi
19. "Let's Have A Kiki" by Scissor Sisters
20. "Stay" by Erik Hassle
21. "Put It Down" by Brandy feat. Chris Brown
22. "Sometimes You Need" by Rufus Wainwright
23. "Houdini (RAC Mix)" by Foster The People
24. "Electric Sky" by Milla Jovovich - The Resident Evil star gets all electro-disco on us and surprises with this Euro-trashy number.
25. "Love is Blindness" by Jack White
26. "Kiss Me Again" by We Are The In Crowd feat. Alex Gaskarth

Enjoy, be tanned, and be merry.

Now, about those Prometheus tickets...