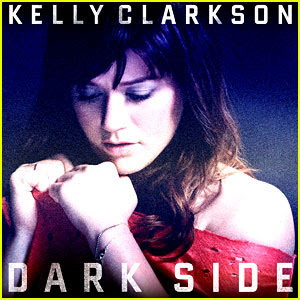 There are songs you fall in love with long before they're released as official singles. And when they are, you're thankful that the artist (and her record label) had the brains and wherewithal to showcase it -- and excited for the inevitable music video that will hopefully complement the visuals you've already conjured up in your mind. But unfortunately, the vid is far from what you imagined.

Kelly Clarkson's "Dark Side" is one of those songs.

As much as I love the song (ever since I got a copy of Stronger back in January), and as great as she looks in the video, I could've done without the PSA sentimentality on display here. While Ms. Clarkson bounces back and forth between two looks (Rough-Around-The-Edges Kelly and Soft-and-Vulnerable Kelly), we're introduced to an ensemble of characters that are going through some tough times: a bullied young man, a girl with body issues, a guy who's lost his job, a war vet, an alcoholic, etc. Each attractive actor seems to have stumbled off the set of a United Colors of Benetton shoot. Therefore, I'm not entirely sure that all of these vague situations necessarily warrant the "dark" label. If the song were called "Victim," then the whole montage would make a little more sense. But I get it; it's supposed to be inspirational (I guess people have already forgotten Christina Aguilera's beautiful "Beautiful" from 2002 -- because, hell, 10 years is way too long ago).

That said, wouldn't it have been cool to see a twisted, comedic take on the song? Why not have Kelly go berserk on a boyfriend a la Pink in "Please Don't Leave Me"? Or be a girl next door with a supervillain alter ego? No? Okay. I'll just sit back, shut up, and watch the result of what happens when a production rushes to pump something out in order to coincide with the debut of said singer's new reality competition show: