Saying Goodbye to Those Desperate Housewives 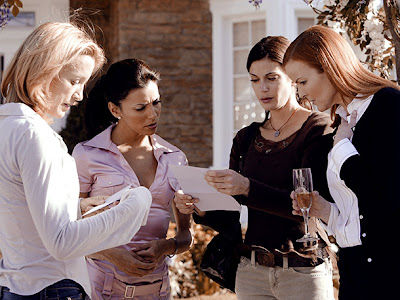 "They watched her as they watch everyone, always hoping the living could learn to put aside rage and sorrow, bitterness and regret. These ghosts watch, wanting people to remember that even the most desperate life is oh so wonderful. But only a lucky few realize the gift they've been given. Most people just go on, day after day, trying in vain to keep secrets that will never stay hidden." - Mary Alice Young

And so concludes the eight-year run of a show that will now takes its rightful and respected place in television history.

The final episode of Desperate Housewives aired last night, and for those of you who still have it saved on the DVR, bookmark this page and come back later because, naturally, there are SPOILERS AHEAD.

The first hour of the action-packed finale, written by Bob Daily, surrounded the denouement of Bree’s trial, which most of us hoped would just wrap up already. And it did, thanks to the dying Karen McCluskey, who, with having nothing to lose, stepped in and falsely confessed to killing Gaby’s evil stepfather, Alejandro. Apparently Karen overheard Carlos and Gaby’s conversation about coming clean (the ladies had been taking turns helping Roy watch over McCluskey during her final days). The plucky senior citizen of Wisteria Lane ultimately saved the day, preventing Bree from doing time in prison (you just know those orange jumpsuits would’ve been horrible for her complexion). Case dismissed. Glad that was taken care of...

The rest of my breakdown/review of last night's poignant farewell to the women of Wisteria Lane can be found over HERE.
Email Post