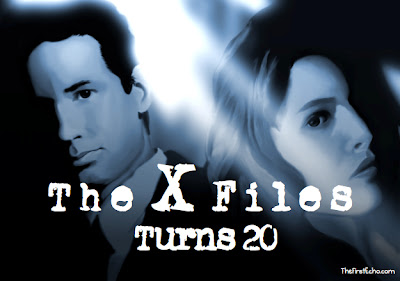 It was the show that not only rejuvenated sci-fi, it practically gave birth to the genre of mythology-driven serials that allowed shows like Lost, Fringe, and Grimm to exist and flourish on network television.

Created by Chris Carter, The X-Files introduced millions of people to what would become one of TV's most popular duos, Mulder and Scully -- the believer and the skeptic -- in the attractive forms of David Duchovny and Gillian Anderson, respectively. These two FBI agents investigated every proverbial bump in the night and out-of-this-world freak show imaginable, and every week each case proved to be creepier than the last.

Next month, my inner fanboy-geek will be celebrating the Emmy-winning drama's 20th anniversary as well as cringing at how fast time has flown since that fateful autumn premiere on Fox.

Allow me to paint a picture for you: It was September 1993. I had just started eighth grade and was looking forward to collecting my umpteenth Fall Preview issue of TV Guide. Having already been a fan of episodic thrills and chills (in the countless paperback horror novels I read in junior high), I was intrigued by this new Friday night drama. The pilot immediately sucked me in with its atmospheric, only-in-Vancouver locales and its eerie, minimalist score. Critics and journalists kept comparing it to The Night Stalker, a short-lived show from the 70s I had never watched. All I knew was this: I had a companion show to complement my other Friday night staple, Picket Fences (I didn't get out much).

The show basically heralded an era of cynicism, doubt, and speculation -- otherwise known as the 90s. During a time when the POTUS had to lie about his indiscretions with a White House intern, and the Internet was quickly turning the public into inquiring voyeurs, The X-Files fed a nation hungry for information and thirsty for truth in any way, shape, or form.

Most of the cases Mulder and Scully solved (or left open) were truly terrifying. Eugene Tooms, the serial killer who thrived on bile and ate people's livers, was one of the first Big Bads that left an impression on viewers as well as my 13-year-old self. The second episode of Season 4, entitled "Home," earned a viewer discretion warning for its graphic portrait of a family of inbreeders. And then there's the darkly comedic "Humbug," a Season 2 entry about the murders of circus sideshow performers; also known as the episode where Scully happily ate a bug. 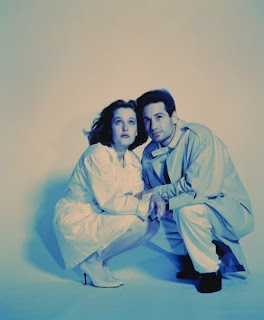 Chris Carter & Co. defied expectations, taking risks and breaking new ground with the narrative style of episodic television. There was "The Post-Modern Prometheus," shot entirely in black-in-white, "Triangle," which was filmed in real time (in one single take), and "Hollywood A.D.," a meta episode that skewered Tinseltown with its satirical edge. And in between the show's "Monster of the Week" stories was a vast and rich mythology involving one mother of a government conspiracy that I won't even attempt to summarize here. Let's just say it involved Mulder's dad and his abducted sister, Scully's sudden pregnancy, super soldiers, black ooze, and a guy who smoked a lot of cigarettes. Like, a lot.

The X-Files was my first true TV obsession (alongside Fox's other primetime hit, Melrose Place). I collected TV Guide clippings, magazine articles, and any random piece of material I could add to my 8-inch-thick scrapbook (that'll win the respect of my classmates). And it didn't stop there. There were the paperback novelizations, the posters, the T-shirts, the XF-themed mix tapes my friend Sarah and I made for each other (it was a simpler, pre-Spotify time), the piles of VHS cassettes of episodes I accumulated, and naturally, the one convention I attended with my nerd buddies, one of whom wrote a piece of XF erotic fan fiction -- another story for another time.

When The X-Files: Fight the Future was released in theaters during the summer after my high school graduation, I ran to my nearest multiplex and experienced the ecstasy of seeing my favorite supernatural crime fighters on the big screen. However, I won't even touch the ginormous disappointment that was 2008's The X-Files: I Want To Believe. (I mean, did that really happen? Or was that just a bad dream co-starring Xzibit and Amanda Peet?)

And then there was this year's 20th Anniversary panel at Comic-Con down in San Diego, a momentous occasion for which I killed three hours waiting in line. Gillian and David never looked better.

Debuting at the beginning of my last year of elementary school and concluding at the end of my senior year of college, The X-Files had an impact on me, not only as an avid TV watcher, but as a writer. It taught me about character development, it taught me about running with one's freaky imagination, and it ultimately taught me the risks of wearing out a show's welcome (and creative juices) for two seasons too long. Regardless, some of the weakest entries in this pioneering drama are still stronger than what may pass for cult entertainment nowadays.

That all said, I wish a happy 20th to Chris, Gillian, David, and the rest of the crew.