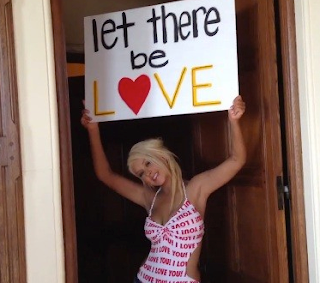 Apparently I'm not the only one who thought this single should've dropped sooner.

Christina, looking trim, happy and absolutely carefree while delivering a heartfelt message to her loyal fans, is finally releasing "Let There Be Love" as her next single. The super-charged dancefloor anthem is a no-brainer when it comes to selecting Top 40 radio-friendly jams. Yet, nearly a year after releasing Lotus, why now? This should have been the obvious choice after the lukewarm reception for "Your Body" put a damper on her alleged comeback.

As for the video: I don't want to hate -- because that would go against the song's blatant message -- but to me, it reeks of a record label (or management team) trying to ride the coattails of Macklemore & Ryan Lewis's "Same Love" or any other pop song with social relevance. That, or a last-ditch attempt to salvage an album before it's completely forgotten and finds a home in the High Profile Pop Album Graveyard.

Don't get me wrong. If you know me well enough, you know Xtina's still one of my five all-time favorite artists. That's why it's a little disheartening for me to see such a great track receive the shot-on-a-Flipcam-and-edited-on-iMovie treatment. The song screams glitter and choreography.


Here's hoping that this is all just a teaser of what's to come...

Or just file this under When Bad Music Video Happent to Great Pop Songs.