Pop Culture Rant of the Week: The Slow and Painful Death of 'Glee' 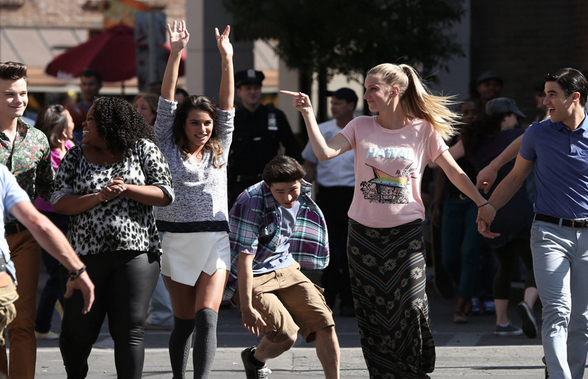 Last night's season 5 finale of Glee closed yet another chapter in the musical trials and tribulations of a group of chorus kids who miraculously achieved all of their dreams in less than a year while living in spacious apartments in the Big Apple (such is the magic of television).

The final number of the season's last episode, a so-so cover of Bastille's Top 40 hit "Pompeii," ended with the show's resident star, Rachel Berry, blatantly breaking the fourth wall and glancing at the camera (as seen at the 3:03 mark below). Of course there have been times when characters' lines of sight have met the home audience's, particularly in the middle of a showstopping performance, but this seemed different. This was an invite for the paltry 2 million viewers who still watch this show to prepare for the beginning of the end, to follow Rachel and some of her pitch-perfect pals one more time as they change locations once again. (Hello Los Angeles!) It was also a sweet reminder of how far this character has come in five years, which were filled with many highs and one particularly devastating low.

*I won't bother with a full recap of the episode. There are people who do that for a living.

That said, 2014 Glee is a far, far cry from the 2009 Glee we all knew, cherished, and tweeted about. What used to be a weekly, self-esteem-building tribute to underdogs has now evolved into a showcase for self-involved theater kids to strut their stuff and deal with problems a majority of the audience can't really relate to: A rich socialite wants to bankroll my singing career! A TV exec wants me to ditch my leading role on Broadway! My boyfriend's an underwear model who can't keep it in his pants!

The underdog is now Top Dog. Glee is the fat nerd who lost a ton of weight, ditched the glasses, got hot, and now has way too much confidence.

Sure, that's what usually and naturally happens with high school losers after graduation, but not at such an accelerated pace (again, it's TV. I get it).

It all comes down to this: Glee is a perfect example of a show that has reached its endgame yet continues to chug along, overstaying its welcome while jumping several sharks at once. The original premise (a Spanish teacher rallies a ragtag group of outcasts to sing out their feelings) leaves little room for change because it's such a wonderfully specific and resonating concept. It can't become anything else, and if it does, the magic of it all -- most importantly, its soul -- is compromised.

The show's 100th episode might as well have been the series finale; maybe a lot of viewers actually thought it was, considering last night's abysmal ratings. Kids graduated, the glee club was shut down, and the alumni of McKinley High moved on to bigger and better things. Yet we still had 8 more episodes and another season to go.

As a current and reluctant watcher of the show, I will still stream the final season (in 2015!) to see how it will all come to an end (as dragged out as it's become). I will still appreciate what the show has done for the American culture, tackling more social issues than any other primetime program in recent memory. But I'm sure my patience will continue to be tested and my eyes will continue to roll. If the rumors of a final 13-episode order are true (as opposed to a full 22), then I'm all for it.

There's no need to prolong the pain when the coffin's been ready for a burial for so long.