10 Songs Perfect For Crying Alone On Your Bathroom Floor 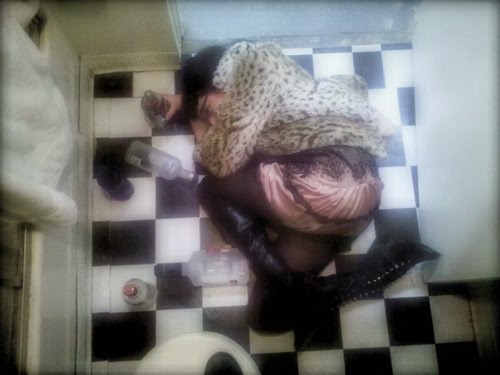 We've all had those bad days, those depressing times when we needed a good cry, to unabashedly feel sorry for ourselves, to feel like the world is covered by one giant, dark cloud that is about to unleash a shitstorm of pain and heartache.

Fall is upon us, nights will grow longer, and we all know how people's moods tend to change along with the leaves. So why not have a soundtrack to accompany those miserably melancholy moments?

Grab a bottle of red, keep some Kleenex nearby, and let it all out:

1. "Why" by Annie Lennox - Why? Because its somber orchestration perfectly captures the mood of someone who needs to let go of all the bad shit that's been festering inside. The song simply facilitates release, an emotional purge everyone needs every now and then. Also? It accompanies one of the best scenes in 1995's Boys on the Side.


2. "Both Sides Now" by Joni Mitchell (the 2001 version) - A great theme song for regret. It goes well with a side of heavy sighing and contemplation. Kudos to the music supervisor of the holiday neo-classic Love Actually for choosing this tune for one of the film's most devastating scenes (it kicks in at 1:15).


3. "I Can't Make You Love Me" by Bonnie Raitt - Raise your hand if you've ever felt undesirable after being on the wrong end of unrequited love! Well, Bonnie's got a song for you...


4. "All By Myself" by Celine Dion (and various artists) - If Bridget Jones can blare this on the stereo after going through a pack of cigarettes and a bottle of wine while cocooned in oversized pajamas on her couch, then you can too. No shame. #SorryNotSorry


5. "Wind Beneath My Wings" by Bette Midler - From the soundtrack to the grandmother of all chick flicks, this is the song that always made my mother change the dial on the radio whenever it came on. She didn't need to burst into tears while commuting to work. But you might need to when you reminisce about your bestie and glory days long gone.

6. "Why Does It Always Rain On Me" by Travis - An ode to insomnia, self-loathing, and the search for sunny days. Enjoy!

7. "2AM (Breathe)" by Anna Nalick - There's light at the end of the long and dark tunnel, and Anna Nalick is here to lead the way.

9. "Someone Like You" by Adele - So your man found someone new. Go ahead, wish him well, but I know you're hurting deep down inside. Keep telling yourself you're going to be okay. But in the meantime, the arrangement of this 2011 megahit is really telling you to curl up in a ball on the cold tile of your bathroom floor and cry for your losses.

10. "Karma Police" by Radiohead - Just keep repeating "This is what you get" over and over while rocking back and forth in the dark.