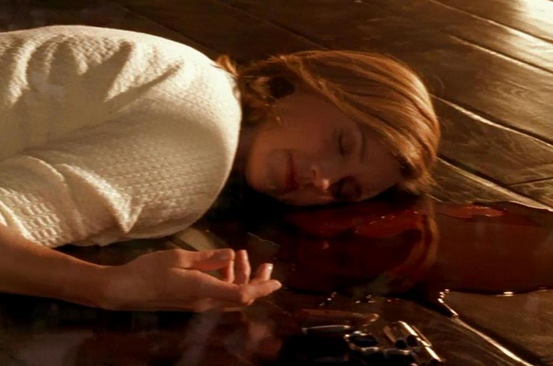 A seemingly happy wife and mother named Mary Alice puts a gun to her head and pulls the trigger...and a seemingly idyllic neighborhood is never the same.

Not since Knots Landing have television viewers been so enraptured by the weekly dramas of a bunch of cul-de-sac-dwelling suburbanites. For eight seasons Wisteria Lane on ABC's Desperate Housewives was a ground zero for soapy fun. It quickly became a place where secrets -- along with several criminals -- were harbored, where a wealthy a former model slept with her gardener, where a neglected wife went off her rocker and shot up a supermarket, where an accident-prone single mom got kidnapped by a vengeful ex-con, where an on-the-lam family hid from an eco-terrorist, where a shady politician got skewered by a picket fence during a tornado, where an airplane crash landed into a Christmas block party, where a serial killer once held a pregnant woman hostage, where a bitchy real estate agent got electrocuted by a telephone pole, where...

You get the idea. 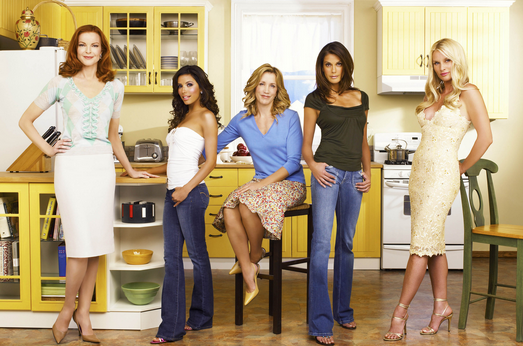 Debuting on October 3, 2004, Desperate Housewives arrived at just the right time, filling a void left by four sexy women who used to chat and gossip over lunch and see each other through some juicy trials and tribulations. If Sex and the City, which ended eight months before, celebrated the comedic dramas of urban female singles, then DH went further and celebrated the comedic dramas of suburban female marrieds (and divorcees).

Instead of sitting around a table and supporting each other while sipping cosmos at a trendy Manhattan hotspot, Susan Mayer (Teri Hatcher), Lynette Scavo (Felictity Huffman), Gabrielle Solis (Eva Longora), and Bree Van de Kamp (Marcia Cross) sat around a kitchen counter supporting each other over cups of coffee. And they did more than just cry on each other's shoulders and lend a sympathetic ear. Like the title of the show suggests, every episode consistently featured these women going out of their way to maintain order around the neighborhood -- and in their homes. Whether it was lying to cover up for a husband's crime, sabotaging a bake sale to get back at a rival, stealing other people's identities to save a life, or corrupting a carpool to avoid walking an extra block in heels, each housewife did whatever it took in order to protect their loved ones and get what they wanted.

While brushing up on the history of femme-centric television, one might discover that gathering around a table to dish about love, lies, and life in general was originally an art perfected by four Miami seniors named Dorothy, Blanche, Rose, and Sophia. The Golden Girls essentially invented the TV Girl-Talk Forum the moment they broke out the cheesecake and sat down to vent their problems. So it may come as no surprise that Marc Cherry, Desperate's creator, had been a writer on the classic sitcom during its last three seasons. The Golden influence on Housewives is evident.

DH also filled another void in prime-time television. It brought back the Nighttime Soap to small screens, tweaking the genre in way that made it more easily digestible for the savvy, sophisticated audiences of the post-Aaron Spelling aughts. It reminded networks that American audiences still had an appetite for serialized plots, especially those that took the "guilty" out of "guilty pleasure." Premiering just one week after another groundbreaking ABC drama, Lost, the Desperate pilot was a shining example of sharp character development and provocative storytelling that treated viewers with respect.

Much like the aforementioned Knots Landing, the show introduced three-dimensional characters general audiences grew to love, placed them in sudsy situations in a believable way, and recognized the absurdity of some of them through delicious one-liners and tongue-in-cheek dialogue that remained consistent throughout the years. 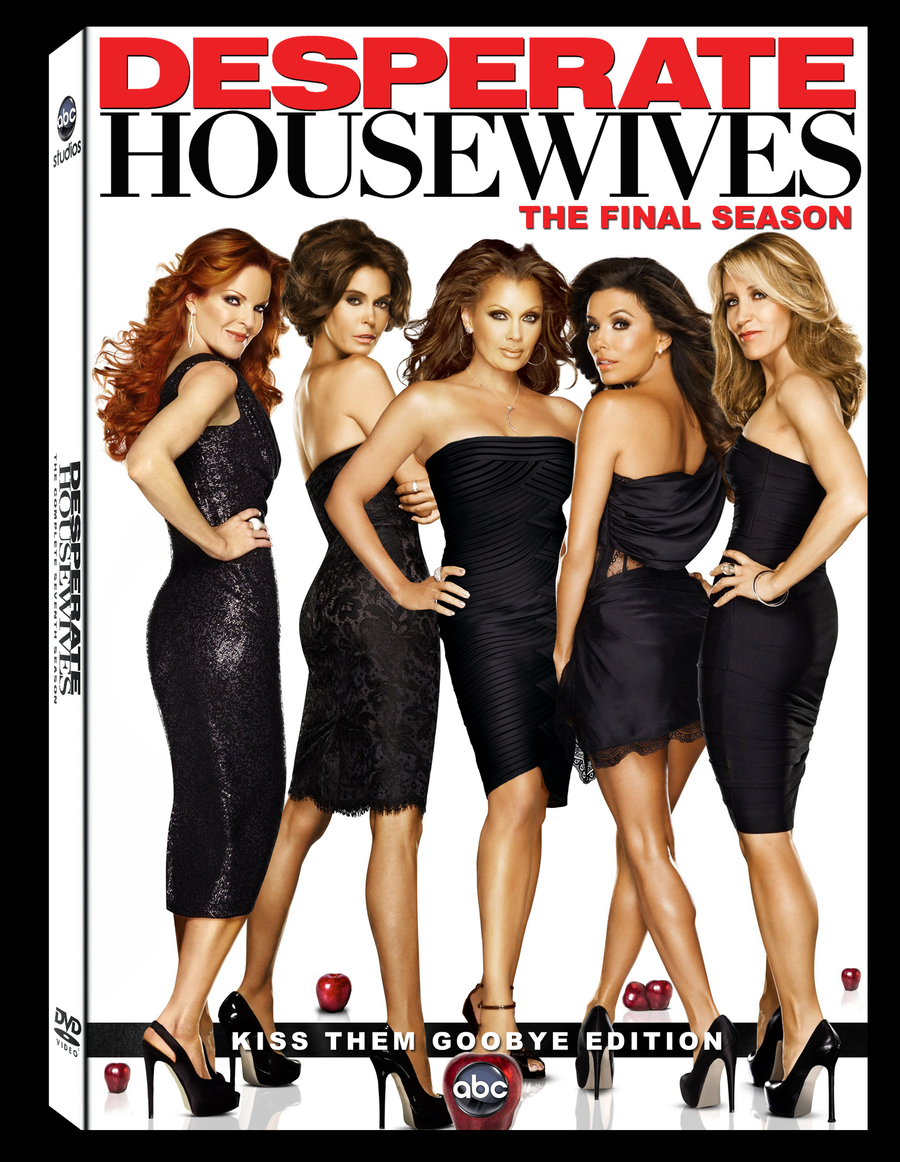 While many complain that the show never regained its mojo after that stellar first season - especially after sitting through the much-maligned second season (Alfre Woodard's got her son locked up in the basement!) - I pity those who were quick to give up and tune out. Having learned their lesson, producers delivered a third and fourth season that reminded loyal followers why they kept coming back to The Lane (new gay neighbors, back-from-the-dead spouses, and Dana Delany, oh my!). Then came the high-profiled stunt for the show's fifth season, that five-year jump into the future. Partners swapped, children grew up, and a new villain moved in (Neal McDonough's bent-on-revenge Dave). As for Season 6, fans were given a double dose of mystery when the Bolen family arrived in town -- see Torchwood's John Barrowman get blown up in a Prius -- and the Fairview Strangler terrorized the neighborhood. (Poor Eddie!) And the writers must have been getting a little nostalgic when they brought back first-season Man of Mystery Paul Young for the seventh season (More revenge! This time with a switched-at-birth twist!) and placed all four leading ladies in their own cover-up scandal in their final year, a storyline reminiscent of Mary-Alice's season 1 predicament (the ladies implicated themselves in the murder of Gaby's abusive stepfather).

Clearly the show was a liberal dressed in a conservative's clothing. The fictional and picturesque town of Fairview is located in the conveniently ambiguous "Eagle State" (Anywhere, USA). It's neither red nor blue but a bold shade of purple, maintaining its appeal to moms in Missouri as well as party boys in West Hollywood. This couldn't be personified any more than in Marcia Cross's Bree Van de Kamp, who was modeled after Marc Cherry's very own mother. Bree may be an uptight, church-going, gun-toting Republican with a penchant for pie-making, but she had a gay son and a less-than-perfect daughter she loved with all her heart.

Like many suburban satires before it, most of which have found success on the big screen (American Beauty, The Ice Storm), the Housewives made their case: Small-town life can be just as scandalous (and dangerous) as any crime-ridden metropolis. Rapists, drug dealers, and murderers aren't downtown -- they're residing in that nice 3-bedroom behind your hedges.

But ultimately, Housewives heralded a new soapy era at ABC, helping to build a home for similarly plotted shows like Brothers & Sisters and Revenge, and most recently, Scandal and How To Get Away With Murder, which are, simply put, rapidly paced soaps disguised as political and legal dramas, respectively. (Shonda Rhimes -- the new Aaron Spelling? Discuss.)