#TBT: That Time I Got Chased Out Of The Glendale Galleria By Security 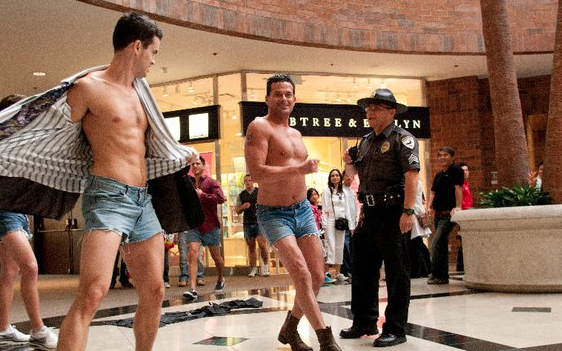 On a very family-friendly Sunday afternoon, six men start stripping in the middle of the Glendale Galleria (in front of Crabtree & Evelyn no less) and proceed to dance and grind to "It's Raining Men."

And yours truly was one of the masterminds behind this failed flash mob (one of many that took place throughout Los Angeles that weekend).

You see, I was the producer for a viral campaign promoting the DVD release of Vampires Suck, which involved a series of public stunts that recreated the Twilight spoof's homoerotic dance number. We were hired by 20th Century Fox Home Entertainment, so we were a totally legit production...except for one tiny detail.

We neglected to inform the aforementioned shopping mall of our plans and totally went in unannounced.

Cue the mall security guard who immediately came over to stop the performance. Cut to: a dozen other mall cops who started running after us the second everyone on our crew scattered and fled the scene. Eventually, despite my pounding heart, I was able to calmly talk to the Head of Security in the stairwell of the mall's parking garage (some of the dancers and I were cornered and trapped at one point). We explained our case and apologized for the sudden burst of beefcake that had been put on display.

Although I'm sure a soccer mom or two (and some giggling teenage girls) got a kick out of it.

You can catch some of our footage here (needless to say, none of the mall footage made it):


Now I know how that kid must've felt in Johnny Knoxville's Bad Grandpa.