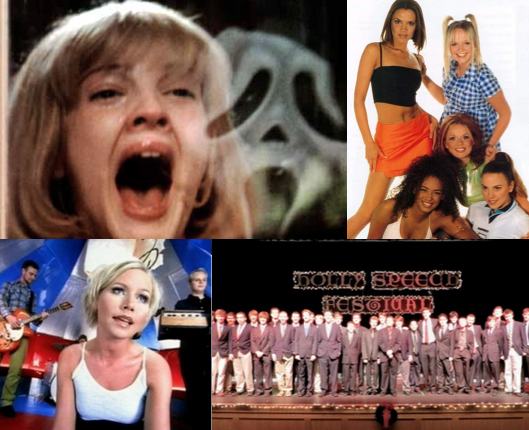 I'm freezing in the back row of a van with my fellow speech-and-debate teammates in a shopping mall parking lot somewhere in Massachusetts. We've just finished (victoriously) competing at the annual Holly Speech Festival at Natick High School. We're still in our suits, blazers, and ties, and we're all exhausted. As I wait for some of my peers to come out of a nearby Starbucks, I proceed to listen to a mixtape on my Aiwa cassette tape player. It consists of "Lovefool" by The Cardigans and "Wannabe," a catchy gem from a new Britpop group called the Spice Girls.

Some of the guys talk about catching a late showing of Baz Luhrmann's Romeo and Juliet, a daring retelling of Shakespeare's classic starring that girl from My So-Called Life and the pretty boy who was on Growing Pains for one season. I then make a mental note to add to my Christmas wish list a VHS copy of Independence Day. (I saw it twice in theaters earlier that summer.) I think it's on sale at Nobody Beats the Wiz or Sam Goody...

I am a junior at Iona Prep, halfway through a school year that will see me soar in the category of Oral Interpretation with my poetry and prose readings of Shel Silverstein and Stephen King. (I proudly place 2nd in the state of New York the following May at a tournament in Albany.)

I am also an avid fan of Melrose Place, and I begin chatting with my friend James about the juicy storylines of the current fifth season. ("Who the hell is Taylor McBride, and how is she tied to Peter's past?" "Will Sydney ever find love?")

During this time I am also intrigued by TV promos for a new thriller from Wes Craven called Scream.


I think to myself: Drew Barrymore's starring in a horror movie now? I'll have to go check it out. And I do -- on Christmas night, with my father. We hit up the General Cinemas multiplex in the Bay Plaza shopping center in the Bronx after a festive day of unwrapping gifts and eating. Turns out I love Scream. Like, really love it. It's the best scary movie I've seen in a long time. It has the best opening scene (and twist) I've ever seen. It's smart. It features characters who are just as knowledgeable and obsessed about horror movies as I am. And it's genuinely thrilling. I become obsessed with this movie and see it again with a bunch of my friends later in the new year.

It is December of 1996. I think of how I'll have to get used to writing "1997" on my homework and essays in English class. I think about how we're three years closer to the new millennium. I wonder what will come then.