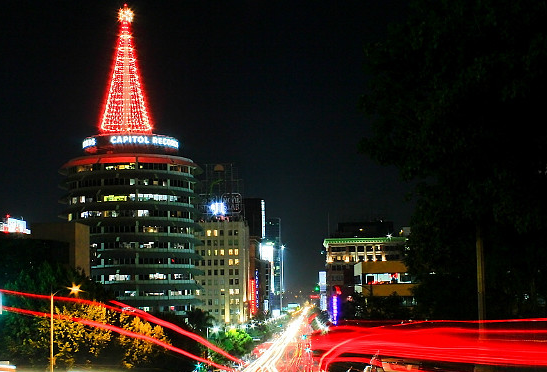 Twas the night before Christmas, and all through L.A.
Not an actor was stirring, nor using valet.
Tinder was ablaze with Netflix and chills,
While the botox flowed freely in Beverly Hills.

The agents were stunned by stars who were deceased,
While their heads filled with visions of box office receipts.
And I in Marc Jacobs, my plus-one in Cavalli,
Were just winding down from Spielberg's big party.

When out on the boulevard there arose such a noise,
I put down my iPhone and saw several boys.
They were scantily clad, yelling "Ho, ho, HO!"
I thought to myself, "Must be from WeHo."

Then over to the left, nursing bottles of craft beer,
The next batch of revelers were soon drawing near.
The man-buns and flannel, I did not mistake,
These hipsters were now arriving from Silverlake.

Not too far behind was a group very catty,
Their offspring in strollers, quite loud and quite bratty,
A dominant species in this part of Cali,
I give you the housewives from OC and the Valley.

Then next came the vegans, the goths, and the tanned,
Who joined hands and smiled, taking a proud stand,
From Santa Monica to Inglewood, there was no delay.
There were even folks who came up from South Bay.

They were all singing merrily, as if brought here by fate,
For weed was now legal across California state.
They celebrated bigly, danced 'round a large tree,
But no cookies for Santa (he's now gluten-free).

Their hero soon arrived, so sudden and quick,
I knew right then that it must be St Nick.
More rapid than the Metro his entourage came,
And he whistled and shouted and called them by name!

"Now Gosling, now Lawrence, now Affleck and Streep!
Take La Brea, take Wilshire, take all surface streets!
To the top of the Hills! To the bistros downtown!
Let's get this this party started, right here and right now!"

And then, in a twinkling, bubbly champagne flowed,
People were everywhere, blanketing the whole road.
As I got out of my Uber and was turning around,
St. Nicholas leapt towards me in one single bound.

He spoke not a word, but reached into his bag,
And pulled out a vape, offering me a drag.
Then laying his finger aside of his nose,
He snorted some glitter, heading towards Melrose.

He sprang to his Benz, to his team gave a shout,
As he hopped on the 10 with a quick "Peace out!"
But I heard him exclaim into the night so clear,
"Happy Holidays to all, and Happy New Year!"