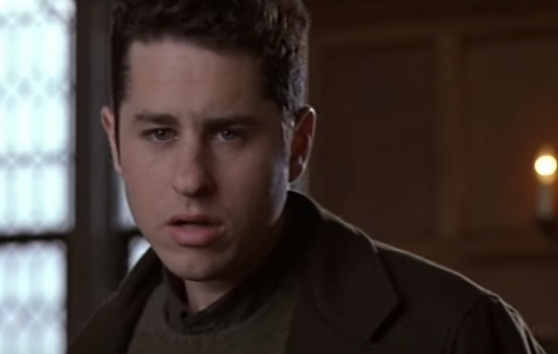 After catching the final performance of John Guare's Six Degrees of Separation on Broadway this month (after which I got a tipsy Allison Janney and a drunk John Benjamin Hickey to sign my playbill), I went into full nostalgia mode, reminiscing about the time I played Dr. Fine in the Boston University Stage Troupe production of the same play during my freshman year.

Then, it was time to look up clips of the 1993 film adaptation starring Stockard Channing, Donald Sutherland, and a baby-faced Will Smith. And little did I know who else makes an appearance in one of the movie's best scenes...

Who is it? Future creator of two of my favorite TV shows (Felicity and Alias) and mega producer-director of Star Wars: The Force Awakens, J.J. Abrams. He plays one of the Ivy League brats, the son of the character I played in a small underground blackbox theater so many years ago.

Soooo...does this make me one degree of separation away from my writing-producing idol?

Check out the clip below. You can't miss him.