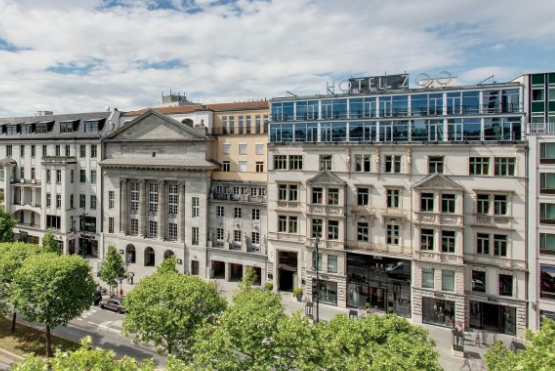 2019 will mark the 30th anniversary of the fall of the Berlin Wall, that defining symbol of the Cold War that physically and ideologically separated the German city for 28 years. What was once referred to as “The Wall of Shame” is now a distant memory, reduced to concrete fragments scattered throughout the city, covered in decades-old graffiti and gum, as well as a hashtag used by tourists looking for a great Instagram op (yours truly included).
To get a sense of how far Berlin has come since Germany’s reunification in 1989, one can take a stroll along the busy and fashionable Kurfürstendamm, one of the city’s most famous boulevards lined with cafes, restaurants, theaters, and a number of posh retailers. And centrally situated among it all is Hotel Zoo, a polished jewel in the crown of the commercial hub — as well as my accommodations during my inaugural trip to the city.
Built in 1891 as a private residence for a wealthy family, the building was converted into an upscale hotel in 1911. By the 1950s, it became the VIP hotel of the Berlin International Film Festival, hosting a number of celebrities of the era. And now, in the late 2010s, it has become an elegant haven with a Soho vibe (London or Manhattan), thanks to the designs of Powerstrip Studios’s Dayna Lee. 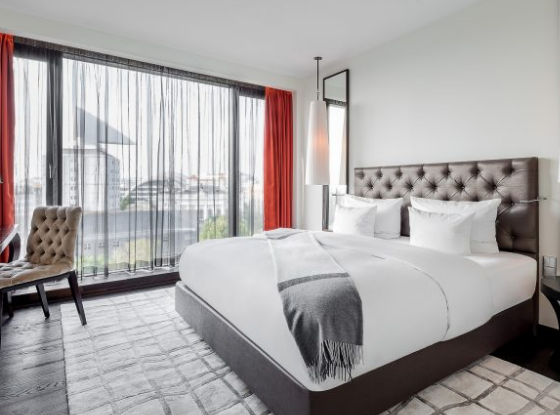 Entering the hotel is like stepping into an affluent townhouse. I made my way down a emerald green-carpeted corridor to the foyer/reception area where I was greeted by Oliver, the hospitable general manager who gave me the rundown on the recent updates to the boutique property. Then, in the “living room” (don’t call it a lobby) I took a moment to lounge on one of the comfy brown leather club chairs with a glass of Moët. As much as I wanted to collapse onto my bed after a long walk, I let the champagne do its work first.
Next, when I retrieved my room key card and stepped into the elevator, I instantly felt like a celebrity, thanks to the activated paparazzi flashes and velvet rope that lined the rectangular, red-carpeted space (one wall is a mural of photographers aiming their lenses at guests). Much of the building’s original elements — exposed brick, curved walls — can be seen in the hotel’s 130 rooms and 14 suites, none of which look alike. And throughout the hallways, guests can ogle the stylish work of Swedish artist Andreas Kock, a series of voyeuristic scenes that offer a glimpse into the old Hotel Zoo.
After settling into my “grand deluxe” room, I quickly changed out of my sweaty day clothes and headed downstairs to meet my friend Karl, a recent transplant from L.A. (and my own personal Berlin attaché), for dinner at GRACE. The hotel’s cosmopolitan-chic restaurant is nestled behind its Roaring 20s bar, past a row of bookcases, behind a pair of large, lacquered wooden doors. There, Dennis-Lucas, our uber-charming server, offered a wine pairing with each course of our meal.
We simply could not turn him down. 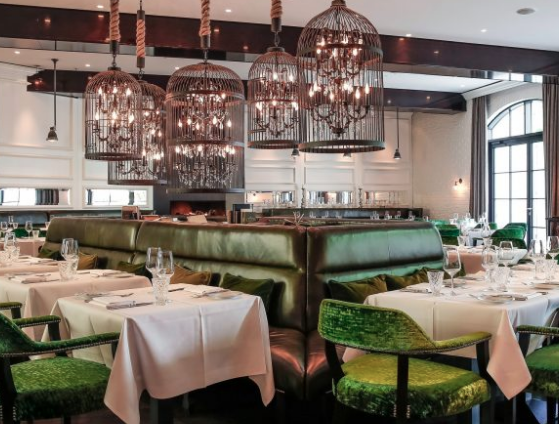 GRACE has long become a fixture in the national and international restaurant scene. Much of the menu has been inspired by Executive Chef Martin Bruhn’s travels throughout Thailand and Vietnam where he gathered flavors from local markets and traditional soup kitchens to transform recipes into sumptuous dishes. We couldn’t stop gushing over the king fish ceviche, bacon-cheddar mashed potatoes, grilled eggplant and peppers, and Wagyu beef with black truffles. This was after we took in the gorgeous details of the space: birdcage-covered chandeliers, emerald green tapestries, and vintage hardbound books — all conjuring up the essence of a Parisian library mixed with a turn-of-the-20th-century writer’s den.
We could have spent all night in there. 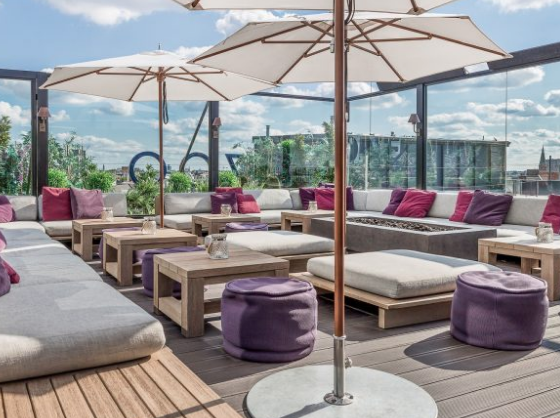 Then there’s the hotel’s rooftop terrace where one can grab a Japanese Julep at the bar (grain whiskey with Nashi & Tonka mash, topped with mint and sparkling sake) and lounge by the open fireplace or waterfall while taking in the 270-degree view of the Berlin cityscape at sunset and listening to the mellow electro-grooves of one of the hotel’s guest DJs. 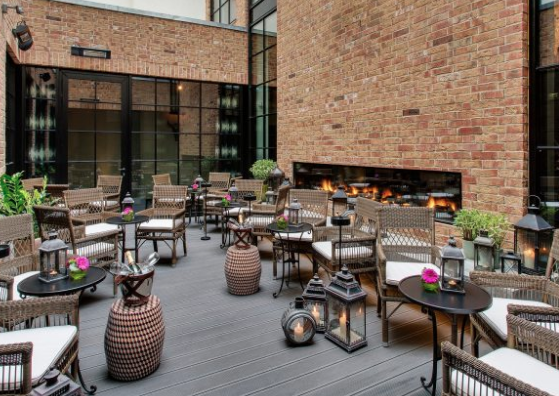 And the Winter Garden, surrounded by large industrial windows, is also another pocket where guests can hide away. This “central oasis” separates the living room from the bar lounge and restaurant, inviting visitors to cozy up to the five-meter-long fireplace that stretches up into the sky above.
At dinner I had snapped a photo of Karl holding his wine glass, eyes closed, head turned as if in deep thought.
“What are you thinking?” I asked.
“I’m not thinking. I’m just savoring this place.”
To book a room or make a reservation at GRACE, visit the hotel’s site for more info.
@TheFirstEcho
reviews Travels