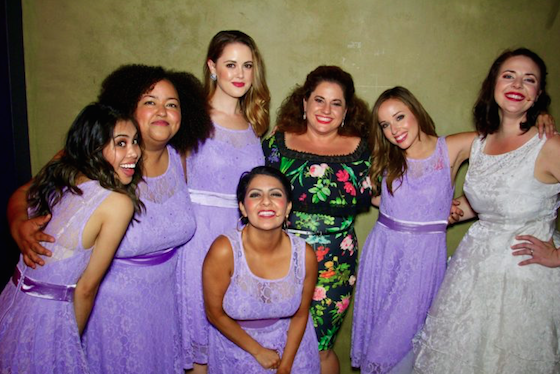 Bridesmaids, the 2011 comedy blockbuster starring Kristen Wiig, Maya Rudolph, and a slew of funny ladies who are now household names, has landed for an encore run at L.A.’s famed Rockwell Table and Stage as part of the venue’s Unauthorized Musical Parody Of… series.
Actress Natalie Lander takes on the role of Annie, originally played by Wiig, the manic maid of honor whose life unravels as she leads her best friend, Lillian (a pitch-perfect Molly Stilliens), and a group of colorful bridesmaids (Ashley Argota, Nohely Quiroz, Aynsley Bubbico, and Desi Dennis-Dylan) on a wild ride to Lillian’s wedding. Along the way she crosses paths with the adorkable cop Rhodes (here played by the charming Nathan Moore) while trying to unwrap herself around the finger of sleazy douchebag Ted (Michael Deni).
The intimate, cabaret-style production is an inspired romp, especially with its surprising mash-ups that manage to make the movie’s memorable scenes even funnier. (Case in point: the iconic, food-poisoning-fueled bridal shop scene becomes a hilarious throwdown between Frozen‘s “Let It Go” and Ludacris’s “Move Bitch.”) And of course the bridesmaids rivalry only gets amped up when these ladies break out into dueling vocals on Eminem’s “Lose Yourself” and Taylor Swift’s “Bad Blood.” The infectiously plucky Lander even manages to hold her own during a super fun rendition of Beyonce’s “Single Ladies,” writhing on the stage like no one’s watching. 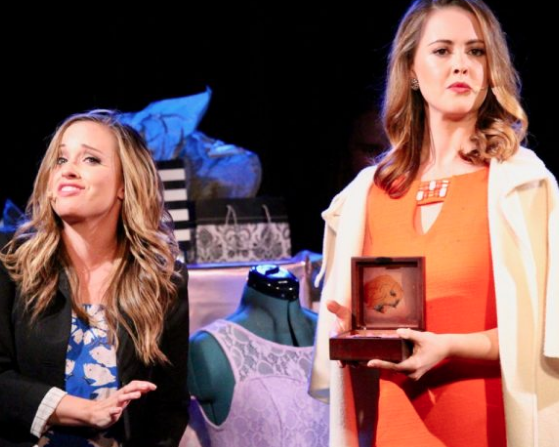 The show, co-directed by the Tony Award-winning Marissa Jaret-Winokur, briskly runs through the two-hour movie in a tight 90 minutes that’s jam-packed with other numbers from the past decade, including Demi Lovato’s “Skyscraper,” P!nk’s “Fuckin’ Perfect,” Katy Perry’s “I Kissed a Girl,” and even that signature closer from 1990, “Hold On” by Wilson Phillips. There are even a few nods to other bridal-themed comedies (hello, My Best Friend’s Wedding) that pop up when you least expect it.
“This parody, driven by song and dialogue, is an homage to one of the most side-splitting films of all times,” says Executive Producer and co-writer Kate Pazakis. “Adapting this for Rockwell’s dinner theater with ‘tasteful raunch’ while recalling our own experiences with weddings—and all that leads up to them—had us rise to the challenge…but it’s guaranteed to keep you laughing. Audiences have been clamoring for it, so we’re thrilled to bring this show back for this special limited run!” 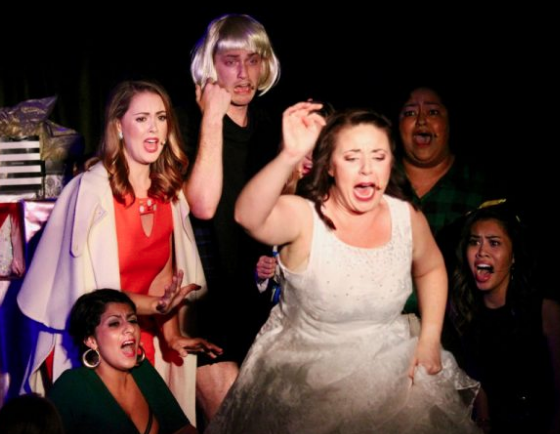 UMPO: Bridesmaids is now running through November 17th, 2018.
Created by Kate Pazakis, The UMPO (The Unauthorized Musical Parody Of) series merges movies and musical theatre, revisiting and retooling popular films for live audiences. Performed with a live band and slews of hit pop songs to help tell the stories, UMPO audiences have been cheering and laughing since 2015. Rockwell Table & Stage is located in Los Feliz at 1714 N. Vermont Ave, Los Angeles. Tickets are now on sale at www.rockwell-la.com.
@TheFirstEcho
Los Angeles reviews theater