Move Over, 'Die Hard': Why 'The Long Kiss Goodnight' Should Also Be a Christmas Favorite 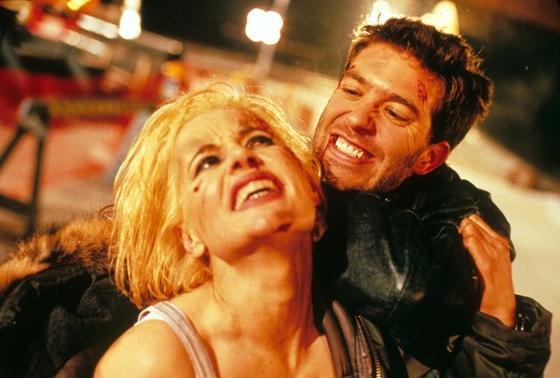 Now that the overly drawn-out debate over Die Hard and its Christmas movie qualifications is finally wrapping up, it's time to present to the pop culture pundits another action-packed film for consideration: 1996's The Long Kiss Goodnight starring Geena Davis and Samuel L. Jackson.

Directed by Geena's then-husband Renny Harlin (Die Hard 2, A Nightmare on Elm Street 4) and written by Christmas obsessive Shane Black (Lethal Weapon, Kiss Kiss Bang Bang), the story about a schoolteacher and housewife with amnesia named Samantha -- who finds out she used to be an assassin named Charly -- should be placed in the Hall of Contemporary Holiday Classics.

The festive, yuletide backdrop in the film acts as a great juxtaposition to the brutal, violent plot. A snowy drive home from a Christmas party turns bloody when Samantha crashes into a deer and triggers memories from her past life (she later puts the deer out of its misery by snapping its neck). A group of carolers are terrorized by a one-eyed thug with a machine gun who tears up Samantha's cozy home. And a small town Christmas parade is interrupted by a car chase during which our heroine leaps off Santa's sleigh and onto an 18-wheeler carrying a chemical bomb.


That said, The Long Kiss Goodnight should be mandatory holiday viewing. (Sorry, Elf and Love, Actually.) This is one F-bomb-laden freeze-pack of fun that has aged considerably well 22 years after it was considered a box office disappointment ($33.4 million domestically).

In other words, it's one of the most criminally underrated movies of the 90s. It was also ahead of its time.

Back in 1996, men were dominating the box office, especially in the action genre (shocker). Will Smith became a bonafide movie star with Independence Day, Tom Cruise took on the first Mission: Impossible, and Arnold Schwarzenegger was still around, protecting Vanessa Williams in Eraser and later battling toy store shoppers in Jingle All The Way. However, a woman who knows how to handle a semi-automatic, beat up a bad guy to a bloody pulp, and detonate barrels of kerosine better than MacGyver was a hard sell back then. As Priscilla Paige at Birth. Movies. Death. writes: 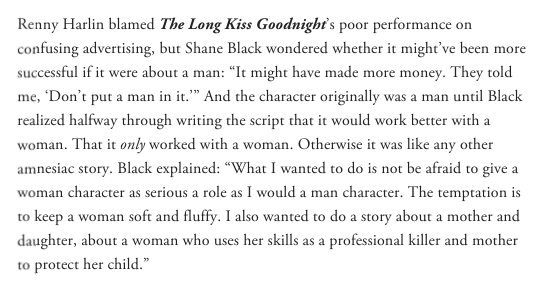 The Long Kiss Goodnight came out 5 years before Jennifer Garner kicked ass on the small screen in Alias and Angelina Jolie swung from the rafters in the original Tomb Raider. It arrived in theaters 14 years before Jolie spied it up in Salt. And it also blew shit up two decades before Charlize Theron shaved her head for Mad Max: Fury Road and went platinum for Atomic Blonde. 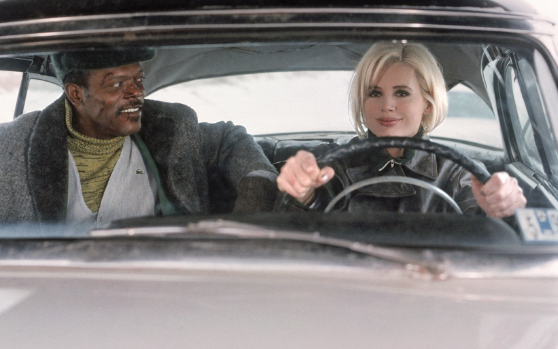 Simply put, Geena Davis & Co. lit the fuse for modern-day action heroines with The Long Kiss Goodnight. And it's no surprise that, 8 years after paving the way for female representation in the genre, the actress founded the Geena Davis Institute on Gender in Media, which is working to "engage, educate, and influence content creators marketers and audiences about the importance of eliminating unconscious bias, highlighting gender balance, challenging stereotypes, creating role models, and scripting a wide variety of strong female characters in entertainment and media that targets and influences children ages 11 and under." Like, whoa.

So do yourself a favor. Find a copy of The Long Kiss Goodnight or stream it wherever you can. Consider it a Christmas gift from me to you.