'Go' Turns 20: A Look Back at the Script, Soundtrack, and Timothy Olyphant's Abs In the spring of 1999, my freshman year of college was nearing its end. My initial taste of dorm life resulted in being fifteen pounds heavier, experimenting with a goatee (I know), and getting my hands on any plaid button-down American Eagle had in stock (screw you, Abercrombie).

The spring of 1999 shall also be remembered as the time I was introduced to one of the few movies that left an impact on me as a young adult -- and no, I'm not talking about The Matrix, which opened on my birthday that year.

Go, directed by Doug Liman (Swingers) and written by John August (Big Fish), was released on April 7, 1999 during the height of drug-fueled raver films at the turn of the new millennium (Groove, Human Traffic, etc.), tapping into a nervous energy that permeated pre-Y2K America.


The movie's cast was a venerable who's-who of late-90s It Boys and It Girls: Katie Holmes (fresh off the first season of Dawson's Creek), Taye Diggs (fresh off Broadway's Rent and post-How Stella Got Her Groove Back), Scott Wolf (wrapping up five seasons on Party of Five), comedian and SNL alum Jay Mohr, Scream 2 suspect Timothy Olyphant, twink-adjacent Clueless vet Breckin Meyer, and Canadian actress Sarah Polley, who was making a splash on the indie scene. It also features a blink-or-you'll-miss-it appearance by a then-unknown Melissa McCarthy (a friend of August's at the time).


"Just so we're clear, you stole a car, shot a bouncer, and had sex with two women?" - Singh

The film is distinctly split up into three acts, each one following a character whose story is connected to the others. It opens with the young Ronna (Polley), a supermarket cashier who needs some quick cash to pay her rent during the holidays and comes up with a scheme to sell baby aspirin to Ecstasy-seeking ravers after a drug deal goes wrong. The next focuses on Ronna's British coworker, Simon (Desmond Askew), who takes a trip with his pals to Vegas where a strip club encounter also goes wrong. And then, in the last vignette, a pair of gay soap opera actors (Wolf and Mohr) go on an undercover drug bust with a cop (William Fichtner) that leads to a very awkward dinner with his wife (Jane Krakowski, taking a break from Ally McBeal at the time).

The moral of these stories: In life, things can go wrong. And they most certainly will. 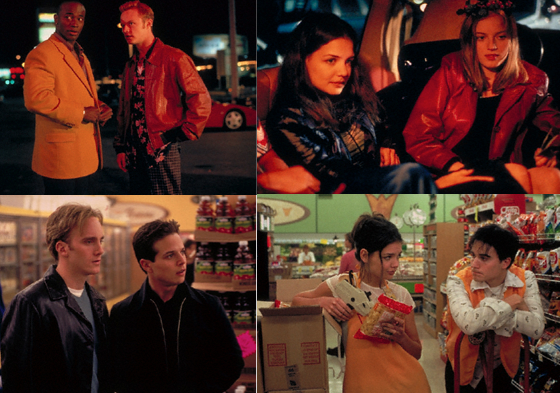 To say Go hardly pinged on anyone's radar twenty years ago would be obvious. One could speculate this was because the film had the misfortune of opening in theaters a week after Keanu Reeves donned a leather trench coat and broke free from the chains of virtual reality in the blockbuster no one saw coming, The Matrix. Earning a total of $16.8 million during its domestic box office run, Go barely recouped its overall budget.

But the reviews from most critics were glowing and respectable. With its razor-sharp dialogue, crafty narrative structure, and Tarantino-lite sensibilities, the movie was considered a junior Pulp Fiction. The contained timeline -- all the action unfolds over the same 12 hours -- also gives everything an urgent tone. And on screen, three interconnected stories featuring a dozen characters get wrapped up in a tight 100 minutes. The most casual of moviegoers couldn't ask for more in a piece of high-octane entertainment.

"You know what I like best about Christmas? The surprises..." - Claire

Like Die Hard, Go also deserves to be considered for Christmas movie categorization. It's an alternative holiday treat with all the trimmings: beat-up jalopies covered in lights, a dance party called Mary X-Mas ("Mary, like a chick. Like her name is Mary. Not like 'you marry her,' you fucking moron."), classic holiday tunes sprinkled throughout, and a shirtless, Santa hat-wearing drug dealer who likes to quote The Breakfast Club.


The film arguably takes a page from Shane Black's Guide to Making a Christmas Crime Movie. It shows the grittier side of Los Angeles during the holidays, much like Lethal Weapon, Kiss Kiss Bang Bang, and The Nice Guys -- all written by Black. “Christmas represents a little stutter in the march of days," Black told Entertainment Weekly in 2016, "a hush in which we have a chance to assess and retrospect our lives. I tend to think that it just informs as a backdrop...I also think that Christmas is just a thing of beauty, especially as it applies to places like Los Angeles, where it’s not so obvious, and you have to dig for it, like little nuggets."

With Go, Liman and August manage to convey what it's like to live in L.A. during a season normally associated with family gatherings, warm fuzzies, and friendly snowmen. The city is known for becoming a chilly ghost town between the twenty-fourth of December and the first of January, leaving behind its few natives and anyone else who can't afford to travel back to wherever they came from. Having Christmas in the background adds a weird yet effective counterpoint to Go's intertwining plots and not-so-family-friendly material.


Contributing to the frenetic vibes of Go is a kickass soundtrack that includes tunes from No Doubt, Natalie Imbruglia, Fatboy Slim, and Len, who scored a hit single with "Steal My Sunshine." Meanwhile, the movie's rapid-fire opening credits is accompanied by Lionrock's "Fire Up The Shoesaw," a stuttering track that sucks in the audience right away. The electronic artist who provided the throbbing score, BT (a.k.a. Brian Transeau), also contributed the pulse-pounding "Believer," a banger heard during the climactic rave scene in Ronna's storyline. (FYI: One year later, BT would release his third studio LP, Movement in Still Life, a seminal piece of work that remains on my top 10 list of all-time favorite albums.)

"I could leave something with you. Collateral."
"I already got a fucking Swatch."

So, how does Go hold up to today's Millennial-populated, social media-driven environment? Surprisingly well.

In fact, watching the film through a 2019 lens reveals something peculiar: a slight passing of the torch from Gen X to what was then called Gen Y (a.k.a. Millennials). The movie's cross-section of ages among its young characters arguably represents a shift in demographics that was felt in pop culture at the time. After all, 1999 was an interesting year for movies. Not only were filmmakers experimenting with the rules of cinema (as seen in Fight Club, The Blair Witch Project, Being John Malkovich, American Beauty, Magnolia, and The Sixth Sense, to name a few), there was also a popcorn-friendlier crop of titles appealing to an emerging, younger group: She's All That, Varsity Blues, Cruel Intentions, and 10 Things I Hate About You. In hindsight, Go perfectly falls somewhere in between, bridging both of those sides as well as a generational gap that seems to have grown wider the deeper we move into the 21st century.

I recently sat down with the hosts of We Watch Things, Jared Ruddell and Carolyn Wright, to talk about Go just in time for its 20th anniversary. They had watched the movie for the first time before we recorded, so it was interesting to get a fresh perspective from viewers (gulp) a decade-plus younger than me.

You can check it out (and feel old like me) here: