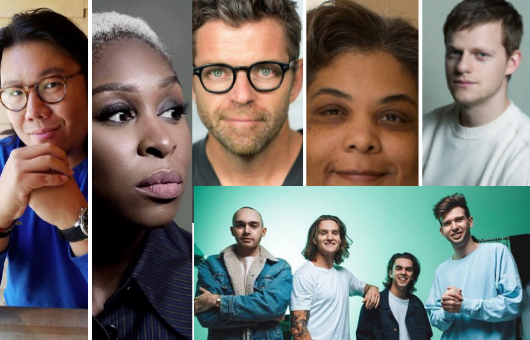 2018 had its challenges -- but it also had some really good keepsakes. Here are some of the people (and things) who kept my year afloat.

1. Kevin Kwan - The author of Crazy Rich Asians and its two sequels became the subject of my Instagram fascination: a writer living a jet-set life, touring the globe on the merits of his writing, and seeing his creation turn into an international, Golden Globe-nominated sensation on the big-screen.

2. Cynthia Erivo - Her role (and singing chops) in the future cult classic, Bad Times at El Royale, caught my attention (along with anyone else who saw Drew Goddard's neo-noir crime thriller) and her fierce supporting role in Widows only cemented my fascination with this Broadway-trained actress.

3. MOBS - They're the Australian synth-pop group that has yet to make a splash in the States, and they hooked me in with their throwback tunes, specifically those on their EP, You Want Beauty, all written from the point of view of characters from 80s movies. But as of this posting, the group has switched record labels, which has led to a repurposed EP called Bad Love that is the only available piece of work now available on Spotify.

4. Roxane Gay - You haven't read her brilliant collection of pop culture essays in Bad Feminist yet? Or her collection of short stories in Difficult Women? Or her painfully raw memoir, Hunger? What are you doing with you life?

5. Dave Holmes - I read his so-relatable-it's-scary memoir, Party of One, two years ago and started listening to his podcast, Homophilia (co-hosted by the equally enjoyable Matt McConkey) last year. And I can't get enough of his insightful, witty, intelligent pop culture thinkpieces at Esquire. In short, I envy Dave Holmes, and I would like his career. Please.

6. Lucas Hedges - I wholeheartedly appreciate and respect a young up-and-coming actor who avoids taking a role on any given CW or Freeform show and opts instead for meaty, award-worthy indie fare.

7. Sideshow Books in L.A. - This small independent bookshop was previously located on Idaho Avenue on the Westside (around the corner from the Nuart Theatre). And when it closed in 2017, I was crushed, thinking it was another nail in the coffin of indie booksellers. But luckily, on one fateful Sunday afternoon, I drove down La Cienega and caught a nondescript sign that read BOOKS in painted letters. I pulled over, walked in, and discovered a new personal haven.

8. Queer Eye's Fab Five - The reboot of the makeover series has successfully recontextualized its format for a post-marriage equality era in America, thanks to the charisma of its lifestyle gurus, Antoni Porowski, Karamo Brown, Jonathan Van Ness, Tan France, and Bobby Berk. Taking the boys out of major metropolitan areas (i.e. NYC) and putting them in the small towns of the South certainly helped. And they helped me feel hopeful again for the future of this country.