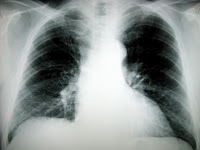 My mom had lung cancer.

Well, I hope that's true by the time you read this. Had. As in, gone. Done away with.

Where did we leave off?

This morning I was too lazy to drive to the gym, but I pushed myself out the door to go on a jog/walk in my neighborhood. I say jog/walk with an emphasis on 'walk' since my pathetic endurance allows me to jog three or four blocks at a time. With every step and every breath I took I imagined each inhalation of fresh air, by some way of divine magic, pumping into my mom's lungs from across the country. Each step, each sucked-in ounce of oxygen, was for her. If I sound like I'm getting all mystical and holistic on you, then blame/applaud Eat Pray Love. I'm 60 pages away from the end, and reading it couldn't have come at a better time. Sure, it's brought on the itch to drop everything and travel across the globe, but simply reading it every night before I go to bed is an act of meditation in itself. I've dogeared several pages on which I've found some helpful quotes to remember. The book can work for anyone, no matter what kind of shit you may be going through.

As I huffed and puffed along the streets of Westwood, I tried to muster up every good thought possible and started to envision positive signs at every corner. I noticed a man walking his golden retriever across the street. The dog turned its head when it spotted me, as if to say: "Hey man, hope your mom pulls through." His voice was soothing like an old man's, full of wisdom and experience. Like Morgan Freeman.

It continued as I went further, imagining wellwishers from all walks of life greeting me along my route. The charcoal gray cat that always sits in front of the house with the brick path: "Hello Hiko, how's your mother doing?" The Guatemalan leafblower who took off his soiled cap and nodded to me: "Buenos dias, Senor Hiko. Send your madre my love." The jogging powercouple who passed me on Santa Monica Boulevard: (out of breath) "Send Sandy our best!" Even a voice from the massive Mormon temple perched on top of the hill two blocks from my apartment: "Although we don't share the same values, we wish your mother all the strength in the world."

The world had my mother's back.

I had gone through a similar scare back in the summer of '04 when my father suffered a stroke in the middle of the work day. It was sudden, and therefore, more of a shock. I received the news when I working as a PA in Studio City. It was extremely terrifying for my father since he had lost his father to a stroke when he was young. I had flown out the following week to see him go through the rigorous physical therapy the best rehab could provide. It was as if the Universe was slapping me in the face telling me, "Hey! Just because you're getting older doesn't mean your parents don't." Thanks for the reminder.

Besides the DVDs, the numerous September issues and the home-cooked meals I plan to provide for my mother, I feel that some music would also help her get through the recovery process. I've already sent her that James Taylor and Carole King concert CD, and although she's managed to learn every word to "Alejandro," she'll need some new tunage. And if you know me, I've already started compiling a playlist. Consider it her aural therapy. Consider it a belated sequel to my summer soundtrack as well.

1. "The Dog Days Are Over" by Florence + The Machine - If this doesn't lift your spirits, then get yourself some serious therapy.
2. "For The First Time" by The Script - These Irish lads have returned with a single about getting through tough times with your head held high:

My dad just called to say that the 4-hour surgery went well. She will have one night in ICU, then off to her regular room to recuperate.

I can breathe a little easier. Hopefully she will too.

Jenny said…
So glad to hear it went well Hiko! Your thoughts during your walk/jog weren't an illusion - we are all pulling for your mom and thinking of your family! Sending love and good thoughts to you all!
6:45 AM