Cause for a Truffle Shuffle 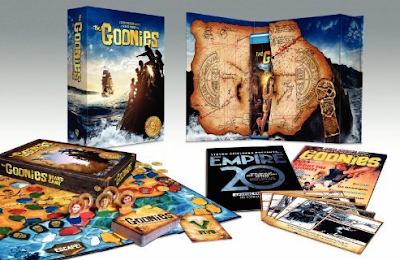 To celebrate 25 years since the dynamic duo of Steven Spielberg and Richard Donner gave us The Goonies on the big screen, the Blu-Ray gods have blessed us with the above (available November 2).

Needless to say, I nearly hyperventilated when I happened to catch this announcement while browsing through Amazon. The film represents a true landmark of my childhood, one of the first movies I had seen in a theater (the first, or the earliest I can remember, was the re-release of Pinocchio sometime in the early 80s). I have vague memories of my grandmother taking me to see The Goonies in one of the old moviehouses on Main Street back in New Rochelle. It must have left a huge impression on me because whenever it showed up on TV, I would drop everything and glue my eyes to the screen. Perhaps it was the whole wonder-and-awe sentiment of the film, allowing millions of little boys and girls to indulge in their ultimate fantasy -- that there's adventure and excitement (and pirate's booty) just waiting to be discovered in your own backyard.

Once my family had recording capabilities on our VCR (circa 1992, embarrassingly late compared to others), I'd tape the movie to keep for future viewings. It wasn't until I was in high school when I finally got the unedited VHS copy in its plush and oversized family-friendly case; I could officially add it to my library, proudly shelved alongside Jurassic Park, My Best Friend is a Vampire, and Bill and Ted's Excellent Adventure. 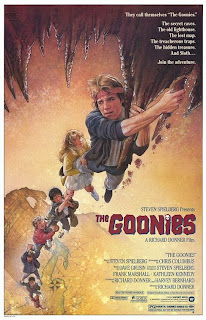 Cut to 2001: My mom had bought our first DVD player on Central Avenue in Yonkers for a then-reasonable $250. Later that summer, I visited a friend in Philadelphia and, upon stopping at a nearby Suncoast, discovered the DVD had contained commentary by the reunited cast. I freaked out and immediately purchased it before hopping on a train back to New York. Goodbye crappy VHS. Hello newly minted DVD...with bonus features! I was ecstatic.

And now, nine years later, I am a giggly little boy all over again...and somewhat sad to know that there exists an entire generation that probably doesn't know the movie at all.

If I ever see the words "Goonies remake" printed in Variety anytime soon, I may have to pull a Sloth and bash the heads of a couple of studio execs.

Jenny said…
"Don't you realize? The next time you see sky, it'll be over another town. The next time you take a test, it'll be in some other school. Our parents, they want the best of stuff for us. But right now, they got to do what's right for them. Because it's their time. Their time! Up there! Down here, it's our time. It's our time down here. That's all over the second we ride up Troy's bucket."