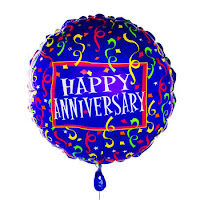 With my current state of affairs, I had nearly forgotten that TheFirstEcho.com turns 4 years old this month. Four years of "life updates" from Los Angeles. Four years of pop cultural commentary and numerous attempts to make sense of this odd planet we call Hollywood. Four years of trying to navigate my life through a gauntlet of rejections, celebrations, surprises and achievements.

Looking back at one of my first postings, I see that four years ago I was obsessed with a new local band called Under The Influence of Giants (and where are they now?) as well as Christina's then-released Back to Basics (a far cry from her Bionic plea for attention). Four years ago I just started working at Anonymous Content. Four years ago I joined a little event called Hot in Hollywood. Four years ago I clearly wasn't the same person who now writes this to you.

And then there's my newest musical obsession: "Microphone," by Sweden's pop prince, Darin. The take-charge, nothing's-gonna-stop-me message is what I need right now. And it doesn't hurt that it's hella catchy with its circa-1988 synths: