20 Years Ago This Month: 'Summertime' and Soapdish 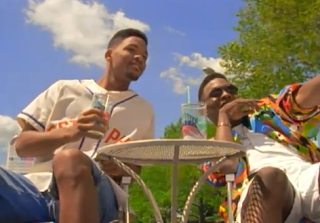 On May 20, 1991, DJ Jazzy Jeff and The Fresh Prince released "Summertime," which went on to peak at #4 on the Billboard Hot 100 and snag a Grammy for Best Rap Song. Yes children, before he was a Man in Black, before he became an Oscar nominee, and before any of his progeny could whip their hair back and forth, Will Smith was shooting low-budget videos in his hometown of Philly, PA, rhyming about barbecues and rolling through the hood with the top down.

I, at the time, was finishing the fifth grade at New Rochelle Catholic Elementary and dreaming about eating popsicles at summer camp and catching fireflies outside my parents' apartment building back in New York.

Let's get nostalgic with it, shall we?

Then, 11 days later in the same month of that year, Soapdish was released in theaters. I had seen this movie at the Bay Plaza shopping center in the Bronx with my mother. The little film buff in me was starting to develop a taste for large ensemble pieces, especially after becoming infatuated with A Fish Called Wanda, Murder by Death, and Grand Canyon. And you couldn't ask for a better ensemble at the time: the future spokeswoman for Boniva, a future Iron Man, a future Desperate housewife, the future co-host of the The View...and a post-Babysitting Elisabeth Shue: