Ten years ago this month I said farewell to England as I completed my junior year through Boston University's internship program in London. After five memorable months of navigating the Underground, minding the gap, munching on fish and chips, and becoming a high tea convert in the posh neighborhood of South Kensington, I felt myself becoming a true Anglophile. Now, whenever I flip over to BBC America, I find myself pining for a black cab to come and whisk me away to Trafalgar Square or Covent Garden.

One of my earliest memories of living in what I call "the Manhattan of Europe" involved a visit to the historic Tower of London along the Thames River. It was a chilly (and wet) January morning. I bundled myself up in a long, woolen Pierre Cardin coat I had bought in Boston the year before. If it weren't for the American Eagle baseball cap (or the Old Navy jeans...or my pair of navy blue Sketchers), I could've passed for a young Asian businessman out for a stroll before attending a board meeting and conducting a peaceful takeover of a subsidiary. 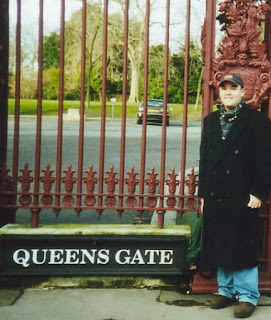 My student tour group congregated in the center court of the ancient property and waited for our guide to lead us through a labyrinthine structure of slippery cobblestone, wooden stairs, and gravel pathways. Dozens of pigeons sat perched above us in barren trees. I imagined them all observing us with cockney accents ("Oy, look at 'em American tourists! Who'da hell dey think dey are comin' into arr coontry?"). I was hoping this tour wouldn't take too long as I was anticipating trying my first proper basket of fish-n-chips ("takeaway," not "to go") at a nearby pub that also served a fine pint of pear cider. I had neglected to eat some breakfast before leaving my Queens Gate flat, and my stomach hated me for it. Finally, when our bespectacled leader arrived, an energetic chap with - you guessed it - a set of less-than-desirable chompers, I loaded a roll of film into my camera (no digitals back then - how primitive!) and lined up behind my flatmate. It was then when I felt a heavy raindrop hit the arm of my coat. Great, I thought. I didn't even bring an umbrella with me. A girl standing to my left gasped and pointed to my arm. I tilted my head and caught what had actually fallen on my less-than-a-year-old designer coat - a large, chunky white streak of paint? I wished.

"Shit," I muttered. Literally. As in, British pigeon excrement (my classier term for bird poop). Needless to say, my appetite disappeared in that instant.

I also became fascinated with Top of the Pops, an American Bandstand-like program that aired every Friday night. Back in the spring of 2001, those lads from uber-boyband Westlife were all the rage:

Naturally I bought the single, and it quickly became a track on the mix CD I eventually made to encapsulate my time spent in the UK.

Living in Europe also introduced me to the wonder that is The Unreleased Single By An American Artist (also known as The European Import). Exhibit A: 'NSync's catchy-as-hell "I'll Never Stop," a jam that sadly never made it to the American tracklisting of the group's No Strings Attached the year before. My friend Michelle and I blared this song on my Discman (that's right) during a bus ride back to London from Wales. We had just completed an "Adventure Weekend" with eight other students during which I celebrated my 21st birthday at a rustic B&B in a small village - complete with a babbling brook, a stone fireplace, home-cooked meals and several dirt roads begging to be explored (I expected to run into Elizabeth Bennett and Mr. Darcy as I strolled along the nearby lake). The occasion was a bit anticlimactic since the drinking age out there was - and still is - 18. I had already been a legal drinker the moment I stepped off the plane two months earlier. Still, the weekend provided one of most memorable birthdays I had ever had. And painful. Rock climbing and horseback riding across the gorgeous countryside left my body sore in places I had never known existed.

This lame excuse for a music video seems to have been produced on a budget of five quid (roughly $8), and to this day I scratch my head and wonder why this single never made it to America.

The rest of my Euro-experiences were all kept and preserved in photo albums, ticket stubs, several souvenirs, a couple of paperbacks, and one denim jacket I proudly purchased on the trendy Bond Street (Topshop, how I miss thee). Leicester Square, thanks for Hippodrome, the giant, gimmicky club no serious Londoner would find himself caught dead in. Bar Monaco in the West End, thank you for introducing me to Absolut Currant. Odeon Cinemas, thank you for your sweet-and-salty popcorn I happily inhaled while watching matinees of Save the Last Dance and Bridget Jones's Diary. Boardwalks of Brighton, thank you for showing me that you're a better-accented version of the Jersey shore (and kudos on those adorable flea markets and antique shops). Double-decker bus drivers, cheers for the late-night rides back to my South Kensington flat after festive nights on the town. Harrods, sorry for never buying anything from you; you just weren't in my budget. And dearest Greece and Italy, many thanks for giving this American boy the best spring break of his life. I could write pages and pages about your hospitality, but considering my readers' attention spans, I'll refrain and save my love letter to you for another time.

London, I hear you calling me back. Someday I shall return and revisit your streets, your pubs, and your fashionable haunts. Tell Graham Norton I'd absolutely love a ticket to his show, and be sure to prepare the clotted cream for my scones during our next afternoon tea together.

Jenny said…
I could have sworn we took a train back from Wales! Wow, my memory is bad!

You think you were sore? Try getting thrown from the horse! ;)

Thanks for this jaunt down memory lane, "Pistachio!" Miss you!
5:50 AM

Alicia said…
This makes me both happy and sad!!! I was thinking the same thing the other day- 10yrs ago Hiko! That's so crazy. What a fabulous 5mo adventure we had :)
7:18 AM