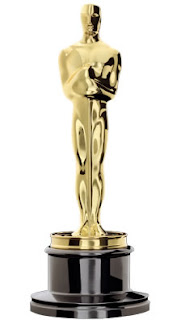 Twas the night before the Oscars, and all through L.A.
Actors were prepping for Hollywood's big day...


Back in 2005, I had the pleasure of experiencing the Academy Awards up-close when I was a wrangler at the Governor's Ball, one of the biggest afterparties known to man. It was a paying gig I gladly took (thanks to a hookup via the ever-fabulous Kathleen Newlove) and remember as The Night I Nearly Tripped Oprah.

Once I was relieved from my exhausting duty of guiding glamorous guests to their ornately designed tables where only half of the food was eaten (Blasphemous! How dare they neglect the culinary crafts of Mr. Wolfgang Puck!), I was able to walk around the huge ballroom above the Kodak Theater and take in my surroundings.

The publicists were crazed, all attached to their cells,
With hopes that those agents would go straight to hell...


I was drawn to the outdoor entryway where there seemed to be hubbub of activity. Cameras were flashing. Well-dressed bystanders hovered around the winners who opted to skip the Vanity Fair party and check out the festivities here. I glimpsed flashes of gold and pretended to be someone I wasn't - a VIP with important ties to producers and A-list talent. For a 24-year-old who had to not lose his shit every time Hilary Swank or Clint Eastwood walked by (this was the year of Million Dollar Baby), I think I did well.

With men in their tuxes, ladies in couture,
The red carpet was filled with glamour galore...


Then came the parting of the crowd. It was as if God Himself had approached the premises: Oprah arrived. And she had a camera crew behind her, apparently taping some B-roll for her post-Oscar show. Remember how amazing she looked in that gold dress? 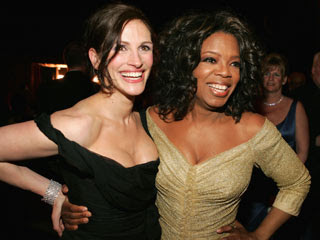 I do...because as I tried to go in for a closer look, I was nearly run down by one of her cameramen who had been trying to maneuver ahead of her. Nearly tripping on a jumble of cables that snaked across the floor, I kicked it away with my shoe. It shuffled over to an empty spot where no one was standing. However, little did I know it was in Queen Winfrey's path. In my mind, I pictured the hypothetical incident in slo-mo: Oprah's foot getting caught on a cable, her falling down, the crowd letting out a collective gasp, and everyone - including the cameras - directing their eyes on me, the party crasher who was out to humiliate the Queen of Daytime Talk.

On Meryl, on Viola, on Melissa, on Rooney,
On Plummer, on Oldman, on Dujardin and Clooney!


Luckily, that didn't happened. Miss O graciously stepped over the cable, and as she walked by, I felt her essence. The woman just exudes power, and everyone else felt it that night. She made her way over to Jamie Foxx, fresh off his Best Actor win for Ray, and the two of them sat down on a platform for an impromptu interview. From twelve feet away I watched in awe. There was so much energy around me, so much vibrant possibility. Naturally, I couldn't help picturing myself attending this event as an official guest or nominee, even though my aspirations were - and still are - in television. 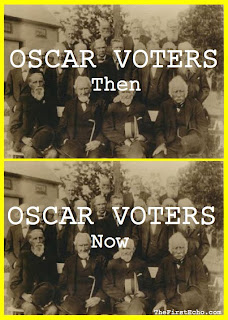 On Sunday, February 26 (tomorrow), I shall tune into the ceremonies that will take place in the heart of Hollywood, just seven miles from my apartment. Yes, I do think The Artist will sweep up. Yes, I do think Billy Crystal will do an admirable job as host, although a part of me is still curious to see what Brett Ratner and Eddie Murphy would've had up their rascally sleeves. And yes, I do think it will be another predictable night full of filler no one cares about and gorgeous red carpet revelations that will have the fashion pundits drooling. However, let's not leave out the one emotional acceptance speech that will have people talking the next morning. Cuba. Halle. That guy from Life Is Beautiful...For me, I won't forget the awesome sincerity and excitement Matt Damon and Ben Affleck shared with the audience when they won the trophy for Best Original Screenplay in 1998 (Good Will Hunting). I was a high school senior back then, and for the first time, I had been truly inspired by the Oscars. The Academy Awards! Not just for old people!

Speaking of old people, I could also go on about how long-in-the-tooth the Academy has become over the past two decades, but Owen Gleiberman at Entertainment Weekly, my pop culture bible, has already taken the words right out of my mouth. Read his insightful piece (I can't agree more with his "boutique" comment) HERE.

Chew on this: The oldest member of the Academy is a 101-year-old man named Arthur Gardner. The Los Angeles Times did a piece on him the other day. Sure, he's one of the few living links we have to Hollywood's Golden Age. But for all we know, he probably thinks Nixon is still president and that Cary Grant deserves to win for his performance in The Descendants.

Oy to the vey.