5 Reasons Why I Still Watch Glee 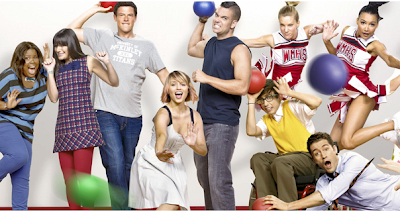 When it comes to TV shows, I consider myself a hardcore loyalist. I endured the subplots that spun out of control at the end of season 4 of Melrose Place (lobotomy anyone?). I stuck through the unnecessarily complicated third season of Lost. And I continue to give Once Upon a Time and Smash a chance despite their surprising...mediocrity.

So, now that Glee is nearing the end of its third season with the futures of many characters up in the air -- regardless of which contracts have been renewed or not -- I'm very curious to see what mastermind Ryan Murphy has up his sleeves regarding the future of the show. Why? Because, despite any backlash or diminished viewer interest the show has suffered from, I do plan to come back for a fourth round of show choir theatrics. 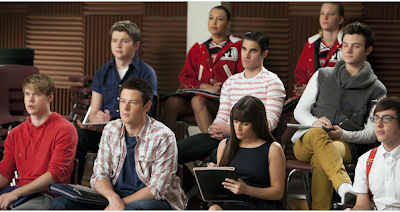 Murphy gave fans a glimmer of hope last summer with The Glee Project, wisely combining the drama of reality-competition with a preview of what's to come on the musical dramedy. And now that most of the original members of New Directions are about to graduate, the writers have come up with a way to make the magic last, to keep viewers tuned in (or, at least I pray they did). Such is the challenge whenever a successful TV show centers on a group of characters in high school. They get older, they move on, just like in real life. Except, this isn't real life. Hopefully we'll find out what kind of satisfying resolution they've come up with in time for next month's finale.

That all said, having stuck with Glee for the past three seasons, the formula of the show has made itself clear: Pick a theme or lesson to accentuate the Conflict of the Week, throw in some contemporary pop tunes to ensure healthy sales on the iTunes charts (actually, the more cross-generational, the better), sprinkle in some barbs for Jane Lynch to spit out (whenever her character can be squeezed in, which isn't weekly), and end with a memorable performance that'll make viewers smile and sit around for a preview of next week's musical shenanigans. 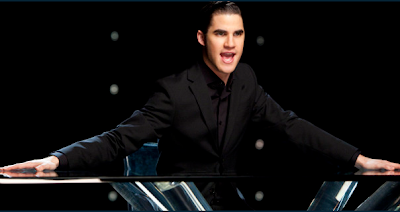 While some have been quick to criticize the show for losing some of its mojo amidst all of the spectacle and predictable developments -- I admit that the show has had its "off" moments, becoming a victim of its own formula and meteoric rise to fame -- I'd like to remain optimistic, hopeful that it can continue to deliver something truly unique and entertaining each week for seasons (I give it two or three more) to come.

5. The promise of new writers - For the first two seasons, Murphy and his two executive producers, Ian Brennan and Brad Falchuk were pretty much responsible for penning all 44 episodes. That's an awful lot a story and dialogue to conquer and distribute evenly among three MacBooks. And it showed: one could sense writers exhaustion halfway through season 2. The third season, however, saw the addition of five new creatives, including "staff writers" Matt Hodgson and Ross Maxwell and producer Marti Noxon (hooray for Buffy alumni!). That can only mean more fresh ideas, more room to grow, and more places (or issues) to explore. After all, this is one show that could've used a few more cooks in the kitchen to keep things going -- something I'm sure Murphy and Falchuk realized after FX locked them down and ran with their American Horror Story pilot last year.

4. Jane Lynch - As long as Sue Sylvester keeps terrorizing the halls of McKinley High in those signature track suits of hers, I'll be a happy camper. And as long as they continue to give her room to evolve with an organic character arc -- although this season's pregnancy storyline is a total head-scratcher -- I'll be even happier. 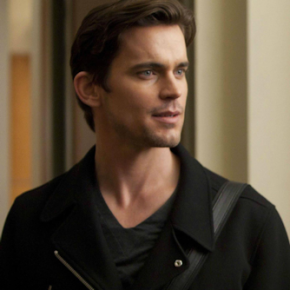 3. The inspired casting - We know the show, particularly Ryan Murphy, can't be trusted when it promises to ease up on the guest-star lineups and not rely on star wattage to distract viewers from what the show is really about, which is providing a platform for underdogs and the voiceless. However, broken promises aside, each famous face that has danced across that McKinley High stage has been a welcome cameo. Matt Bomer playng Blaine's older, hotshot brother? On the nose (However, I'm not sure I appreciated the result of Quinn's car accident being summed up in one line of dialogue to make room for the White Collar stud).

2. The music - Say what you want about the show transforming into an overly glossed-up parade of pop that's giving American Idol a run for its money, but every episode this season thus far has featured at least one or two showstoppers that had me scrambling for the Buy button on my iTunes account. And from a production standpoint, one has to acknowledge the fact that not only are they assembling an episode of television each week, they're creating an album as well -- and that's one hell of a feat to accomplish.

1. Its contribution to television diversity - Not only has this show been groundbreaking, it has kicked down doors regarding the inclusion of minorities -- and it continues to do so. Last week's disco-themed show introduced us to what may possibly be the first transgendered teen character on a major network television show. But what makes Glee stand out isn't just the mere presence of these colorful, three-dimensional characters (lesbian cheerleaders, an out gay teen couple who sing to each other in the hallways, an interracial romance, a handicapped nerd who nabs the school ditz, an assistant coach with Downs Syndrome), it's the way the show treats them -- equally -- like the human beings they are. The show manages to balance their issues through both rose-colored glasses (everyone comes together to sing "Love Shack" at Breadstix!) and a realistic lens (Karofsky's heartbreaking suicide attempt). *By the way, using Helen Mirren to narrate Becky's internal monologue was genius.

All in all, Glee has done for a generation what My So-Called Life attempted to do 18 years ago. And it's kind of shocking to see how long it took for someone to engagingly portray the increasingly diverse and segmented youth of America, ultimately showing them that they can be united in their differences...especially when there's a song and dance number involved.

And there you have it. Sure, I may be adopting the mentality of an abused wife who keeps coming back to her manipulative husband by remaining dedicated to this show, but that's how Hiko "C"'s it.