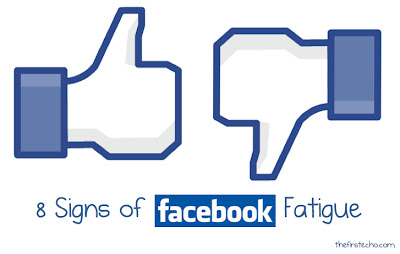 I consider some of my time spent on Facebook work-related. Research, if you will. It's become one of my main sources for news, particularly when it comes to pop cultural headlines. However, I'm getting the feeling that the Facebook phenomenon has hit a plateau. As much as I love posting new music videos I like, Tumblrs I'm addicted to, links to news articles I find fascinating, songs I'm obsessed with, memes I can't resist, and pictures I'd like to show off, I am starting to see why there may be an emerging cultural shift in attitude towards Mark Zuckerberg's game-changing creation.

At the risk of being called a hypocrite, I have to say that I'm starting to detect some symptoms of Facebook Fatigue. And by "fatigue" I don't necessarily mean I've grown tired of it. It's more of a realization of my love-hate relationship with the social network and all of its trappings. I don't like that it's the first site I visit every time I go online (shortly after Gmail). It's become a common practice, a standard, a reflex -- check email, check Facebook. It has undoubtedly become embedded in my (our) very existence. I average about two statuses, three shares, and one check-in each day. And yes, my social media constituents and I may bitch about the layout changes it undergoes every so often -- Zuckerberg & Co's gotta keep us on our toes -- and still we come back. It's taken over a good chunk of my daily life, and I want to feel horrible about it, but a large part of me continues to accept it, continues to use it, continues to embrace it for what it has done (positively) for the world.

It's hard to believe that only four years ago I was just starting to maneuver my way around what was being toted as "the new MySpace." Oh how quickly things have changed. After countless status updates, ignored Mafia War invites, unwanted photo tags, and meaningless pokes, I'm finding the psychological aspect of Facebook quite fascinating. I've started to see how it, like Twitter, feeds narcissistic tendencies, provides a false sense of entitlement, and adds a complicated dimension to relationships, romantic or otherwise. God, if I were back in my sociology class at BU, I'm sure I'd have a field day with a thesis paper.

I'm not saying I'm quitting social media altogether. For writers, it's become a channel for them to broaden their audience, and I, for one, plan to milk this machine for all it's worth. But there comes a time when I feel the need to disconnect from the Matrix. The brain needs to reset and become one with its natural environment, take a vacay in the Land of Analog. If this is an addiction, then the first step in treatment is to acknowledge the addiction, right?

Here are eight signs I've noticed that point to my current Facebook Fatigue:

8. Increased frustration (and bordeom) with people's lack of imagination in their status updates. Where's the creativity? Must you announce to the world that you're in line at Starbucks and that "it's a madhouse"? No, you don't. You're boring. Remind me why I'm "friends" with you again.

7. Becoming easily irritated with someone who has posted a link to the same parody video you just posted -- without giving you a proper shout-out (because you know they just copied it from your post).

6. The pressure to link your Twitter, Instagram, GetGlue, HuffPo, FourSquare, and Grindr accounts to your Facebook page can be stifling. You feel compelled to simultaneously let everyone know where you are, what you're doing, and how you're feeling (as if we all care).

5. You start thinking in status updates. Any random thought or daydream you have in the shower, in the car, or in the elevator at work automatically becomes a status update (Status updates = the new thought bubble). 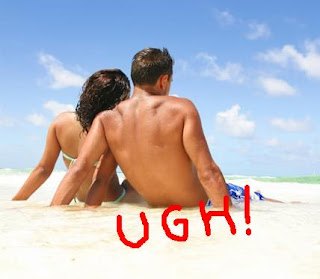 4. Becoming instantly jealous of a friend after browsing through his/her gorgeous vacation photos from last week. This jealousy soon turns into self-hatred as you remember what you did last week...which was mindlessly browse through other people's albums. The same can be said about baby announcements, promotions, and other "big" achievements. If other people's news makes you feel shitty about your own life, then Facebook has done its job.

3. Ignoring 99% of the "event" invitations you receive. Party invites used to be exciting. Now, as a jaded social media whore, you feel fine disregarding an invitation to a mixer because it came from someone whom you haven't seen in three years. Plus, there's a good chance it's from some chick you met once through a friend you hardly see anymore, so the whole thing is moot.

2. The crushing disappointment from a lack of comments and "likes" on a status update you originally thought was brilliant. Therefore your ego and self-esteem get psychologically bruised. This leads to self-questioning: Does no one like me? Chill out, dude. You might want to make sure the filter settings on your statuses are set to "Friends" and not "Only Me" (a mistake I admittedly made last month).

1. The time suckage of it all. When scrolling down a timeline or two (or seven), minutes and hours cease to exist for you. Therefore you find yourself setting aside a block of time solely for Facebook. One second you're wishing someone a HBD (happy birthday), and the next you're checking out their attractive friends, reading their posts, getting caught up in an interesting news article, laughing at a meme, and watching a 5-minute video on a dog that farts on cue. Poof! Your Saturday afternoon is gone.

*If you or a loved one suffers from Facebook Fatigue, consult your doctor before taking the necessary steps to relieve these symptoms.