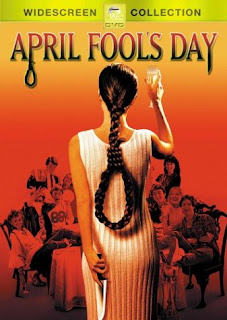 'Tis the first day of April, and you know what that means (besides nursing my birthday hangover)!

Time to pop in the DVD of a classic 80s slasher flick which, 26 years later, still holds up as a nifty, little thriller that stands above most of its holiday-horror brethren from the blood-soaked era (Silent Night Deadly Night, My Bloody Valentine, Graduation Day).

April Fools Day begins a la Ten Little Indians, Agatha Christie's classic murder mystery also known as And Then There Were None. Eight people (in this case, college students) gather together for a weekend at an old, isolated house on an island owned by heiress Muffy St. John (Valley Girl's Deborah Foreman), and soon enough each guest gets knocked off one by one by a mysterious killer. 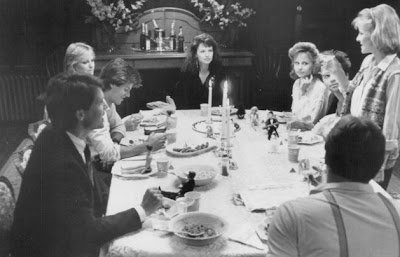 The cast of AFD includes a number of young actors who were in their prime back in those Reagan years. Thomas F. Wilson (Biff from Back to the Future) plays skirt chaser Arch, who trips into a nasty booby trap in the woods. Deborah Goodrich (Just One Of The Guys) is Nikki, a blonde who fills the babe-in-a-swimsuit quota for the film (bring on those flat-chested jokes). And Friday the 13th, Part II's Amy Steel is front and center as Kit, a girl with an insecure boyfriend who puts together the pieces of the puzzle before more bodies are added to the pile. Other characters include Nan (Leah Pinset), the bookish loner with a secret who'd rather read Paradise Lost than chug beers, Rob (Ken Olandt) the resident hunk who can't get into med school, Harvey (Jay Baker) a yuppie wannabe with ulterior motives, Skip (Griffin O'Neal) the prankster whose jokes go too far, and Chaz (Clayton Rohner) Nikki's videocamera-toting boyfriend who stumbles upon some kinky toys in one of the guest rooms.


AFD isn't your average B-grade slasher flick from the 80s. First of all, it does reasonably well in the department of character development. Our group of youngsters aren't complete cardboard cutouts or easily disposable horror movie cliches. During the prank-filled dinner scene (and introductory prologue that's reminiscent of today's "found footage" trend) we actually get a peek at some nuanced performances. Second, the movie moves along at a swift pace, establishing a foreboding atmosphere and dropping little hints at what's to come (or not to come). And finally, there's that twist ending, a surprise denouement that sets the movie apart from its predecessors. When all is said and done, there isn't another movie in the genre that quite matches the entertaining resolution to this frightfest. 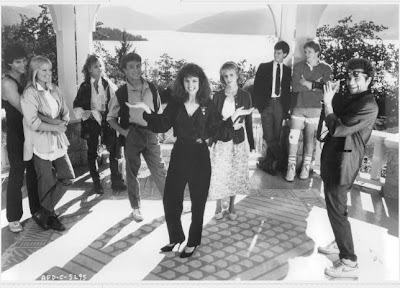