We get it. Traffic in L.A. can be a major bitch sometimes, and for those of us who live in this chaotic car culture of Southern California, we have to adapt to the different kinds of bumper-to-bumper grind in which we find ourselves trapped on a weekly basis. Hence why you see us behind the wheel killing time reapplying our make-up, reading the newspaper, and shamelessly lip syncing to Taylor Swift's "I Knew You Were Trouble" (sir in the Subaru on La Cienega, you know who you are).

Here's a few of the jams I've gotten myself into over the past decade...

1. The Hollywood Bowl Nightmare - Weekend nights from May to October at the top of Highland Avenue is not the place to be as you'll most likely be struggling to swim upstream against a current created by exiting concert attendees. Plus, you don't want to risk running down one of the hundreds of picnic basket-carrying pedestrians walking back to their parked cars on Hollywood Boulevard. I have a friend who has a condo a block away from the Bowl; none of our friends will visit him at night Fridays through Sundays.

2. The Golden Globes Clusterfuck - If you live on the Westside like me, and you need to pass through Beverly Hills where Santa Monica Boulevard crosses Wilshire on this eventful Sunday, you're screwed. Although the detour isn't all that inconvenient, it's still a challenge to weave your way through countless limousines, news vans, and paparazzi who will do anything to get a snapshot of Jennifer Lopez. 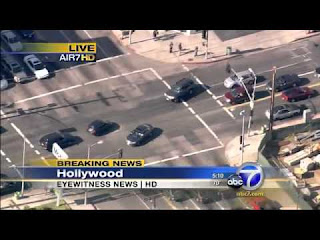 3. The Get-Out-Of-The-Way-There's-A-Police-Chase Holdup - Los Angeles is known for their high-speed pursuits, and when there's some dumbass attempting to elude the cops in a stolen Escalade (or a rickety pick-up truck), pull over to the side of the road with the rest of the innocent drivers who are already experiencing a commute from hell.

4. The Academy Awards Detour - Don't bother going anywhere near Hollywood and Highland on Oscar Sunday because you. Will. Regret. It. All of Hollywood believes that laying out the world's largest red carpet along several city blocks is more important than your need to rush home to watch the newest episode of Girls.

5. The Staples Center and Nokia Theater Exodus - The I-10 and I-110 interchange in downtown L.A. is ground zero for this grand traffic jam. Basketball games, Lady Gaga concerts, The American Music Awards -- they're all cause for avoiding any route through DTLA. My advice for anyone with a dinner reservation in Pasadena: Make it an In-N-Out night instead.

7. Fairfax Avenue in Little Ethiopia - The northbound stretch of street between Olympic and Pico Boulevards is one of those portals to Hell I try to avoid every chance I get. I have yet to figure out why, at any given time on any given day, traffic comes to a standstill. Perhaps it's some kind of marketing ploy created by the numerous ethnic restaurants that line up those two blocks. WTF, Little Ethiopia? WTF?

8. The West Hollywood Shutdown - This occurs twice a year: during the annual LGBT Pride Festival in June and during October's Halloween Carnivale. Sure, parking restrictions may be lifted in WeHo during these celebrations, but the line to get within these city limits is longer than the one for the men's room at The Abbey. If you MUST head into the costumed chaos, cab it to Doheny (or Crescent Heights if you're coming from the east) and walk it.

9. Santa Monica Boulevard eastbound after 3pm in West L.A. - Besides waterboarding, there is no worse torture (In conjunction with #6).

10. The Beverly Hills Bitchslap - This other particular strip of Santa Monica Boulevard in the 90210 is always clogged (blame tourists on the weekends), a gauntlet of traffic lights situated at each corner for a seven-block stretch. It's one major stop-and-go that never lets up. Tip: if you're looking to make it through every light in one sprint, try it at 1:50 in the morning. I'm convinced traffic controllers are leaving their stations at that time for a late-night snack.

That all said: Urban planners of Los Angeles, get your shit together.

D said…
Currently writing a little something on a similar topic. Couldn't agree more with the sentiment that LA needs some serious urban planning!!
7:47 PM