The following is text message exchange between yours truly and fellow blogger-commentator (and unforgiving critic) Garytt Poirier during the ABC broadcast of the 85th Annual Academy Awards. Cupcakes were consumed, wine was imbibed, and eyes were rolled during this viewing. Read at your own risk...

G: Solid opening jokes so far by Seth MacFarlane.
H: These bitches My friends are making me pause the DVR. May have to catch up during the first commercial break.

I catch up to the live broadcast.

H: Okay, yes, best in a while. And we will be editing this.

G: To be honest, everybody in that best supporting actor category deserved a trophy, but somebody had to win it.
H: Any could've won.

H: Look, it's Jack Nicholson! Someone should check if he's still breathing.
G: No Lakers home game. That's the only reason why he's there.

H: Melissa is a dame.
G: I'm pretty sure the Academy didn't see any of these animated movies this year. That's the only way Brave could have won.
H: Paperman was pure magic.
G: Paperman deserved it. But Wreck-It Ralph or ParaNorman should have won.

H: Damn, I should've put Pi down for cinematography in my Oscar pool!
G: You were dumb not to...I have Ang Lee as the upset win for Best Director.

And we get the first acceptance speech of the night to be cut off by the orchestra. And Channing Tatum comes out with Jennifer Aniston to present Hair and Makeup.

H: The Jaws cue was great.
H: Channing Tatum can't read the Teleprompter. Not surprised. Oh, and you can see the spray tan on Aniston.
G: The costume designer lady is my favorite new person. Short sweet. Knows her place.
H: Chopsticks lady must be the hairstylist.

One minute into the performance...

G: Just peed while belting out the 007 theme.

G: Why do I get the feeling that Liam Neeson is scolding me? I don't know what I did, but I'm sorry!
H: He will find you, and he will kill you.
G: Or train me to become Darth Vader or Batman.

The cameras cut to a seated Amy Adams and her husband/date.

A tribute to contemporary musicals kicks off.

G: I giggle every time someone says Les Miserables.

The cast of Les Mis comes out to perform and close out the tribute to contemporary musicals.

H: Where's the Jaws cue when Russell Crowe came out?
G: It was out of respect...I guess.

H: Am I drunk, or is Ted a real animatronic and not CGI-ed? 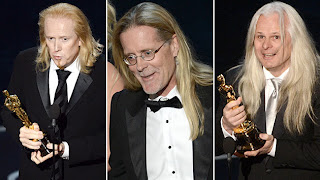 Skyfall and Zero Dark Thirty both win for Sound Editing, and it's the first time in a long time where the same film didn't sweep both this category and Sound Mixing (that went to Les Miserables).

H: Why is Plummer's nose purple?

Anne Hathaway, to no one's surprise, nabs the Oscar for her role as Fantine in Les Miserables. Her speech is surprisingly tame, dull, and safe (someone didn't want to come off as pretentious again).

G: So we pretty much gave Anne Hathaway an Oscar for getting a haircut.
H: Michael Ian Black had the best tweet: Did you just see Amy Adams tug her ear to activate the Al Queda sleeper cell?

A group of college students get pulled out on stage. The future of filmmaking, ladies and gentlemen!

H: The Oscars got a diversity program now?
G: Hey, one of those guys is my intern. Seriously.

Adele begins to perform "Skyfall" while surrounded by an orchestra.

G: Kristen Stewart is the most boring person ever. But I bet she's dynamite in bed.
H: She should never be invited to the Oscars. Even if she ever gets nominated, which would happen when pigs grow wings.
G: Opening second bottle of wine.

H: So is Sofia Vergara the poor man's Salma Hayek?
G: I'd argue the opposite.

G: I still want to cry when I honk about Tony Scott.
H: Honk?
G: Think! I meant think! 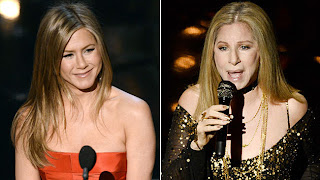 The performance ends. The show fades to black in silence.

H: Did Babs just cause an Oscar blackout? Take that, Super Bowl.

H: Really ABC? So You Think You Can Dive? #Splash

G: Richard Gere had a spectacular performance this year in Arbitrage.
H: I heard.
G: I opened my second bottle of wine.
H: You told me.

G: I told everybody Ang Lee would win best director!

Jennifer Lawrence wins for her performance in Silver Linings Playbook.

H: Katniss!
G: I would have liked to have seen Jessica Chastain win. But congrats nonetheless.

Daniel Day-Lewis wins Best Actor and acknowledges his wife in his acceptance speech.

H: You hear that Hollywood? Daniel Day-Lewis's wife is versatile.

Jack Nicholson appears to present Best Picture, but he has some help from...

G: Michelle Obama? Something tells me Lincoln may win.

It doesn't. Argo takes the top prize of the night.

G: I cannot be happier for Ben Affleck.
H: Argo Oscar yourself. And Chastain didn't impress me in Zero.
G: You're dumb.
H: Hostile much?
G: I bet you watched it on a screener and not on a big screen.
H: I did see it on a big screen, bitch.
G: OK. OK.
H: Thank you for participating. This Oscar text session has expired.