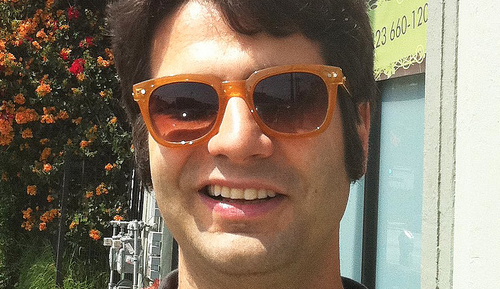 Back in 2007 I had the privilege of meeting Ned Vizzini in an apartment in Hollywood while celebrating a mutual friend's birthday. Coincidentally, I had finished reading his novel, Be More Chill, several months prior and had fallen in love with his writing. The novel, an Entertainment Weekly Top 10 Book of 2004, is about a high school loser who takes a pill to make himself cool and popular. It was one of the best pieces of fiction I had read in a while, and I had been thrilled by the circumstances that allowed us to cross paths. Rarely does one get a chance to meet - and befriend - someone whose work you enjoy and admire.

From then on, Ned became a "writer friend," one of those acquaintances I'd meet up for coffee every once in a while. I was always inspired after our conversations, hearing about his latest projects and sharing what we were enjoying at the time (and sure, I had some writer envy). And then there were birthday and holiday gatherings throughout the years. He treated me to a birthday mojito at last year's festivities and burned me a copy of Alphabeat's new album (my favorite Danish pop group) when I attended a Christmas party he and his wife Sabra had hosted. He even took some time out of his schedule to help me with a little video project I had worked on during the summer of 2010 (he pops up at the 2:11 mark).


When I received a call from our mutual friend last night, telling me about the news of his death being plastered all over Twitter and Facebook (the guy has many dedicated fans and followers), I had to check for myself and hoped that it was some kind of bizarre hoax or publicity prank. Sadly though, after receiving another phone call confirming the news, I was speechless. What was heartbreakingly jarring is the fact that one of my peers had taken his own life. The amount of thoughts and speculation that follow such an act are many, but all that matters is that this talented human being who touched lives is no longer on this earth.

News like this just stuns a person into a state of disbelief, and you can't help but flash back to all the memories you had with him. I had been corresponding with Ned via email shortly before Thanksgiving, asking him if he was interested in being a guest contributor for Bello Mag. Naturally he was busy, but I was proud of him for landing a staff gig on J.J. Abrams's mid-season drama, Believe. I wished him well and hoped "to see you soon!" As for the last time I physically saw him, it was back in April at the L.A. Times Festival of Books at USC. I wanted to show my support, sit in on a panel he was sharing with director Chris Columbus, and hear them excitedly talk about their new project, a young-adult fantasy series called House of Secrets.

The posts inevitably followed across all social media platforms:

Nick Buchanan at Vulture.com recently posted about Ned's passing, quoting from an interview which discussed the writer's past struggles with depression. Ned's soundbite was as follows: "My favorite distraction from suicidal thoughts is riding my bike. Bad thoughts get caught under the front wheel and good ones whiz up the back into brain."

This quote reminds me of one of the last times I had met up with Ned for coffee. It was at L.A. Mill in Silverlake, and after parking my car, I found Ned chaining his bicycle to a fence. He had said that he loved riding in his neighborhood. I simply thought it was because he was being environmentally conscious and saving up on gas money.

Now I know why.

Ned, here's to celebrating nothing but good thoughts.

Christina said…
Hiko, your tribute is very touching. My prayers are with his family, and my thoughts are with you. I remember you as a true optimist, and I hope even news as sad as this doesn't keep you down too long. Sending love across the mikes. Christina
6:54 PM

Anonymous said…
I worked at NY Press back in my younger days as an intern and remember Ned and his talent. Thanks for your lovely post, Hiko.