So I Finally Saw 'Divergent'...and Here Are My Thoughts 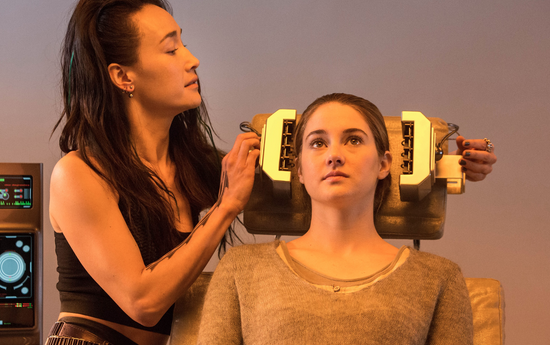 I'm not one to ignore a major pop culture phenomenon. After the third Harry Potter film, I became a full-fledged fan (thanks to Alfonso Cuaron's panache) and read the subsequent novels before each film was released. I avoided Twilight in theaters but rented it after curiosity got the best of me...and that was all I needed to see. Then came The Hunger Games, a dystopian saga I enjoyed and proudly got behind (I have yet to read its third and final installment, Mockingjay).

Therefore I willingly dragged my ass to a Monday night screening of Divergent, the Shailene Woodley-fronted adaptation of yet another YA moneymaking franchise that will, thanks to current box office receipts, stretch out into four films. I admittedly went into this movie having read some reviews, listened to a podcast discussing its flaws and merits, and heard my friends have orgasms over the sight of British actor Theo James, a rising star I interviewed over a year ago.

I'm not going to treat this as an official movie review. Instead, these are the thoughts that ran through my head as I sat, watched, and rolled my eyes during some moments in the two-plus-hour film -- a story that's basically about a society that refuses to allow a female to have her own thoughts (not a far cry, I assume, from the celebutantes contracted with the E! Network).

1. The highlight for me was seeing Kate Winslet get the beatdown from a younger actress who sounds 12.

2. By the third act I was getting some Stepford Wives vibes.

3. Send Ashley Judd running with a gun, and suddenly you have an unintended homage to Ashley Judd thrillers of the past.

4. Let me get this straight: there's no water in sight, yet those dystopian farmers can grow crops?

5. Tony Goldwyn needs to pick better things to do during his summer vacations away from Scandal set.

6. It's a shame Hollywood wasn't this obsessed with YA fiction back in the 90s when I consumed every horror-fantasy series that existed on the shelves of every Barnes & Noble, Waldenbooks, and Borders.

7. Why does Chicago need protection? Is there a new top-secret deep-dish pizza recipe? What is the wall for???

9. Was a sales associate from Hot Topic brought on board to design those Dauntless uniforms?