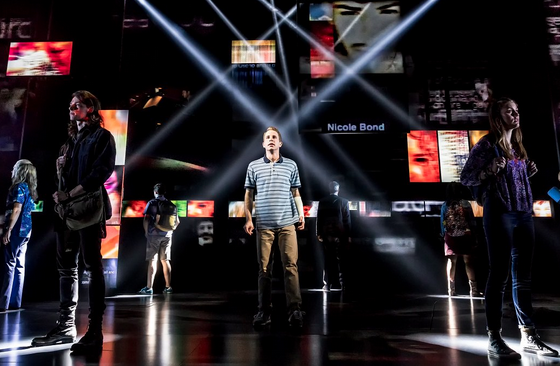 Dear Evan Hansen, which officially opened in New York City just two months ago, is becoming the kind of Broadway musical that not only speaks to a generation -- it's a salve for all theater nerds -- it's poised to become the next phenomenon that resonates across all walks of life.

It tells the tale of a socially awkward teen (brilliantly played by Pitch Perfect's Ben Platt, who is, well...pitch perfect) who finds himself caught in a web of lies shortly after a fellow classmate commits suicide, sending ripples throughout their school and the homes of two families.

I had the absolute pleasure of attending a matinee back in December, and the fantastic, piano-pop-rock soundtrack immediately and firmly planted itself in my head, particularly "You Will Be Found," the centerpiece showstopper that will undoubtedly become the theme for anyone who's ever felt like an outsider. All thanks to Benj Pasek and Justin Paul's music and lyrics.

While the message is somewhat familiar (the "you are not alone" sentiment has been heard before in numerous songs meant to uplift and inspire), the powerful delivery of the performances will leave you shook. And given our country's current anxieties, we need a tune like this to make us feel those warm tinglies that are necessary for soldiering on through whatever shitstorm you may be in.


And if you're looking to sample the rest, the Original Cast Recording album is now available...basically everywhere.