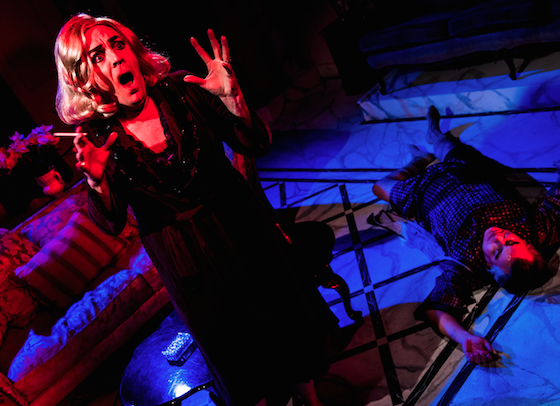 Comic actor (and personal acquaintance) Drew Droege may be known across the interwebs for his consistent (and hilarious) work as a consummate Chloe Sevigny impersonator (for proof, just watch), but he’s also spreading his wings to conquer the big screen (Scouts Guide to the Zombie Apocalypse) cable television (Logo’s Cocktails & Classics), and the New York theater scene (the critically-acclaimed Bright Colors and Bold Patterns). And now, he’s bringing his fabulous stage presence back to Los Angeles in writer Charles Busch‘s camptastic Hollywood satire Die, Mommie, Die! (Remember the 2003 cult film adaptation? Now you can revisit it — live — at L.A.’s Celebration Theatre at the Lex now through March 26.)


Wonderfully directed by Ryan Bergmann, Mommie is set in 1967 and stars Droege as aging Hollywood starlet Angela Arden, trapped in a hateful marriage to sleazy film producer Sol (a perfectly gruff Pat Towne). And it’s only aggravated by the presence of their nosy maid Bootsie (Gina Torrecilla), spoiled daughter Edith, played by a fierce Julanne Chidi Hill, and anxiety-ridden son/mama’s boy Lance, played by the hysterical Tom DeTrinis, who shares Angela’s penchant for dramatics (and Droege’s penchant for gloriously exaggerated diction). The only relief Angela can find is in the arms of the well-endowed Tony, an actor with more swagger than he can handle (the delightfully swashbuckling Andrew Carter). 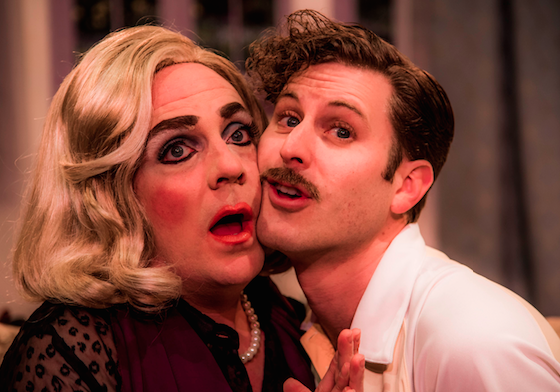 So when Angela plots to murder her unloving hubby, all hell breaks loose. Characters make rash decisions, things snowball out of control, and the laughs keep coming.
To call Mommie campy noir would be an understatement. On stage, it is pure, unadulterated farce that recalls the delightful zaniness of a Neil Simon living room production from the 70s with its razor-sharp dialogue, chaotic entrances and exits, and ridiculous plot twists.
It’s one entertaining trip — literally, when Angela is slipped some acid in the second act, turning the impressive set into a multicolor-tinged playroom that allows Droege to run wild and channel what can only be described as his inner, most unhinged Bette Davis.
Which begs the question: Was Susan Sarandon really Ryan Murphy’s first pick for FX’s upcoming Feud: Bette and Joan?
Looks like we’ll never know.
Die, Mommie, Die! is now playing at the Celebration Theatre at The Lex through March 26. Get tickets HERE.
@TheFirstEcho
Email Post
Labels: Los Angeles reviews theater